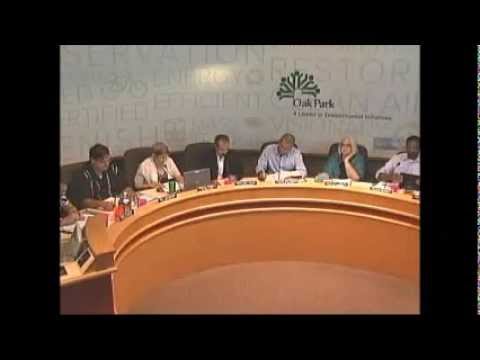 On Monday the Oak Park village board issued a proclamation congratulating Wednesday Journal on being named the best large weekly newspaper in the state by the Illinois Press Association.

Village President Anan Abu-Taleb read the proclamation and then opened the floor up to comments from the trustees, an opportunity Trustee Bob Tucker couldn't pass up.

"It's exciting to see OP Resident, OP Dad and Enuf is Enuf in the audience tonight," he said, referring to several pseudonyms commenters use on OakPark.com. Aside from a few other jokes about being misquoted and not agreeing with several of the paper's editorials Tucker says the newspaper serves a vital role within the community.

Andy Johnston, director of operations at the Journal, spoke for the company in accepting the proclamation.

"You could not invent a better town in which to run a newspaper than Oak Park," he said. "We thank you for giving us so much to write about and for writing these nice words about us."

Congratulations to the WJ...well-deserved award, and some well-placed, good-natured digs by Bob Tucker. Running a newspaper is incredibly tough work, and Oak Park (and the surrounding communities) are fortunate to have such a stalwart outfit chronicling the community as steadfastly as it does.

Nick, to cast aspersions means to attack. Stating the...

Tom Holmes did it again. Splendid coverage, full of...

This is not a public dialogue but aspersions by a ...