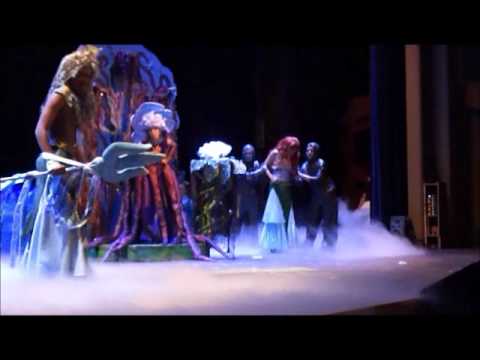 A recent stage production of Little Mermaid by the BRAVO performing arts program wowed audience members so much so that one of them, a Village Theater player, was compelled to call Wednesday Journal about it.

Rosemary Foley, managing director of Village Players and Brooks parent, was highly impressed with one of the costumes. Student Caitlin Kenoian played the villainess Ursula and wore an elaborate costume featuring the sea witch's long, octopus tentacles. But these tentacles, which were attached to the purple costume and flowed down to the ground, were moving, thanks to the Vex Robotics club at Brooks Middle School.

The idea of having the tentacles actually move mechanically was something of an "aha" moment.

"The whole idea started as a vision of 'wouldn't it be cool to have Ursula's tentacles move, even when she is just standing there?' says Marcia Frank, a Brooks parent who designed the Ursula costume. "Then, remembering that we have such an amazing, award-winning Vex Robotics program in the school, there was the thought of 'wouldn't it be cool if some of those kids in the Vex Robotics program would help to build and operate the tentacles — if it actually worked in the first place.' The result was fantastic."

It did work, so much so that audience members at last weekend's performance at Brooks had to do a couple of double-takes at what they were seeing, recalls Foley.

"I think Tina Reynolds has taken it to a new level and I was really, really, really excited about it," Foley said. "I think it's something I would like to see, as a theater person, introduced to the rest ofOak Parkand whoever else that theater has so many applications outside of just performing that these Vex Robotics kids can get jazzed about."

The costume's robotics were designed and built by Brooks teacher Don Robinson and club members Cyrus Murray and Peter Bosco. The boys were able to operate some of Ursula's dozen or so tentacles, even as she moved about the stage.

They were remote control-operated by the club members sitting in the front row, who were there for all of the performances.

"The collaboration with Vex Robotics was unique and exciting for all of us involved," says Tina Reynolds, director of the BRAVO program.

Check out the video to see it for yourself.

I love how forward-thinking this is. What a great idea to collaborate! BRAVO to BRAVO and VEX!

On: Commission shoots down request to...

On: Commission shoots down request to...

it is also up to each household whether or not they...

Adults can play sports, go to a casino, go golfing or...

Currently I live in Brooklyn, NY which has a huge...

And thank you, William!

We grew up in River Forest and sadly I think a lot of...

On: Don't defund our police