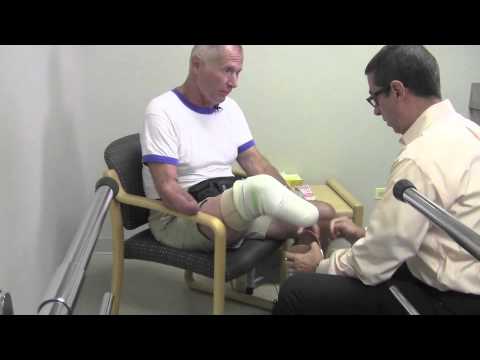 Randy Earl of Chicago tests a bionic ankle on a set of steps at Scheck and Siress Advanced Orthotics and Prosthetics in Oak Park. "I never thought I would get this," Earl said. "This is like Christmas 50 times over. I walk so natural. It's incredible close." David Pierini/Staff Photographer
< >
< >

Randy Earl, who's been an amputee for over 20 years, is one of the first patients in Chicago to be fitted with a BiOM bionic ankle at Scheck and Siress in Oak Park. Rosie Powers/Digital Editor

Randy Earl of Chicago tests a bionic ankle on a set of steps at Scheck and Siress Advanced Orthotics and Prosthetics in Oak Park. "I never thought I would get this," Earl said. "This is like Christmas 50 times over. I walk so natural. It's incredible close." David Pierini/Staff Photographer

Randy Earl, 64, will return to work at the Shedd Aquarium this week without fearing the bruises he usually gets from walking around all day, thanks to first-of-its-kind technology, which is available in Oak Park.

Earl, of Joliet, does a lot of walking during a typical day at the Shedd. He thought there was no way to avoid the bruises, which were caused by different types of prosthetic legs and feet he's used over time. He was electrocuted 25 years ago while up on a power line as part of his job with ComEd. He lost part of his right arm as well as his lower right leg and foot.

But the BiOM bionic lower leg system that Earl was fitted for Thursday in Oak Park is the first product to offer powered plantar flexion, said Brian Frasure, the director of clinical operations for iWalk, a Massachusetts company that developed it. The battery-powered system gives its user an extra push at the end of a step in order to replace lost muscle and joint function. The powered response makes it easier for Earl to climb stairs, and the power can be turned up to allow him to walk on hilly terrain as well.

Earl said he had never realized before he tried the product how much effort he was exerting to move his right foot.

"This emulates a natural walk so much better than anything before," he said. "I'm going to go out and climb a tree."

Jeff Gerber, iWalk's regional director, said Earl's fitting at Scheck & Siress, an orthotic and prosthetic practice in Oak Park, is the first in the Chicago area.

Earl said he didn't expect to like the BiOM as much as he did when the company first asked him to test it out. It might feel heavy at 4.7 pounds, and he would have to charge it nightly. But after testing it around the hallways and up and down stairs at Scheck & Siress, he said, "I can't believe something could make such a difference."

With many amputees coming back following the wars in Iraq and Afghanistan, there was a major surge in technology and a lot of government money available to fund it, Frasure said. BiOM was created with money from the Department of Defense and the Veterans Administration. It has been on the market for less than two years.

Frasure, who is also an amputee and uses the same product, emphasized that the BiOM is still the "big cellphone" of that type of technology. In the future, they hope to make the battery last longer and operate with less noise. Users might also be able to control the settings with apps on their smart phones. Earl's settings are stored in a tablet but he can't control them.

The cost to users depends on their insurance policy. The company is looking to make the BiOM available to people on Medicare in 2013, Gerber said.

Earl compared using the product to teaching an old dog new tricks, and said he was quickly getting used to the BiOM in preparation for his return to work.

I'm happy for you Randy, you finally have something that's comfortable that you can walk around with

Congrats on 30 years with the Journal, Marc!

Did any white people get up and share their...