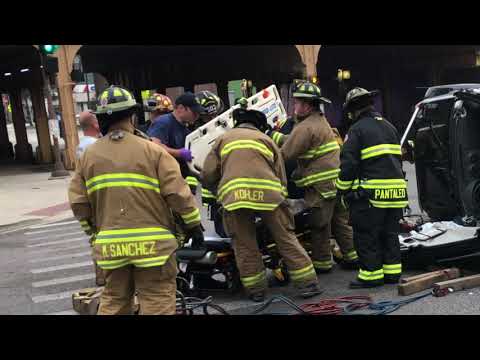 Oak Park firefighters extricated a man from this SUV which rolled over after it was struck by a southbound vehicle at the intersection of Ridgeland Avenue and South Boulevard on Sept. 20. (Photo by John Roberts/Contributor)
< >
< >

No one was seriously injured during a rollover crash at the intersection of Ridgeland Avenue and South Boulevard in Oak Park on the morning of Sept. 20, but traffic was disrupted for more than an hour as police and firefighters cleared the scene and investigated the incident.

The crash took place during the morning rush hour, about 7 a.m. According to David Powers, Oak Park's communications director, investigators determined that a driver traveling south on Ridgeland Avenue failed to obey a red light, striking a westbound vehicle containing two people on South Boulevard. The impact of the crash rolled the struck vehicle onto its side.

Asked for more detail on the incident on Sept. 23, police Commander Shatonya Johnson declined to release any information on the people or vehicles involved in the crash. Wednesday Journal has filed a Freedom of Information request to obtain the information.

Firefighters had to remove the roof of the vehicle struck by the southbound car in order to extricate one of the victims. The other appeared to be able to exit the vehicle through a window and walk to a waiting ambulance.

The two people in the victim vehicle and the driver of the vehicle that allegedly ran the red light were taken to Rush Oak Park Hospital, where they were treated and released, Powers said.

We can offer safe, creative, professional, and affordable solutions to address the need of your cluttered, unorganized closets. Using either wire shelving components, or more attractive wood grain laminated particle board, we successfully work...

This is a big part of the problem with Oak Park...

One reason Oak Park citizens may tend to want to...

It's shocking to see anyone defend Anan's statements....

Very well written reflection on your experience and...

On: The looting of our minds

It appears to me that the mayor is making a genuine...

That place is a disgrace. The walls facing Harlem look...

On: Mohr Concrete back on the market

In general, Steve, if convicted, a person's prior...

On: Felony hate charges brought against...