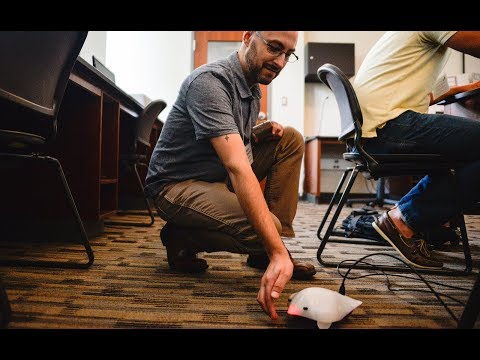 Wired in: Georgia State University professor Joe Normandin works with his robot as part of an educational lab at Dominican University on July 27. | ALEXA ROGALS/Staff Photographer

Jenny Taylor, academic specialist at Michigan State University, gets ready to test out the Robot Finch on Thursday, July 27, 2017 during a robotics demonstration in Parmer Hall at Dominican University in River Forest. | ALEXA ROGALS/Staff Photographer

Professor Bob Calin-Jagman, left, and Andrew Maurer, assistant professor for the department of neuroscience at University of Florida talk about the Robot Finch and their classes on Thursday, July 27, 2017 during a robotics demonstration in Parmer Hall at Dominican University in River Forest. | ALEXA ROGALS/Staff Photographer

Professor Bob Calin-Jagman shows the sea slugs they use for class on Thursday, July 27, 2017 during a robotics demonstration in Parmer Hall at Dominican University in River Forest. | ALEXA ROGALS/Staff Photographer

Oak Parker Bob Calin-Jageman, a professor of psychology at Dominican University and director of the school's neuroscience department, premiered a new computer program July 27 to a dozen or so professors in a lab on the university's River Forest campus, as part of a national conference with educators and researchers from across the country.

The group included some of the more than 100 college faculty from universities across the country who gathered on Dominican's campus last weekend for the 2017 Faculty for Undergraduate Neuroscience Workshop, a four-day event with educational discussions, feature presentations and lab demonstrations.

Attendees came from all over the nation, including Emory University, Cornell University, Harvard University and the University of California-Berkeley.

The program, dubbed "Cartoon Network," took Calin-Jageman a few days to design and is open-source, free and available online at github.com/rcalinjageman/cartoon_network.

"We want college instructors to use it, we want elementary and junior high school students to use it," Calin-Jageman said. "We hope it'll get out there and people will use it."

Cartoon Network allows users to manipulate animated neurons — the basic building blocks of brain systems — on screen to create communication pathways in a mockup of a central nervous system.

Then, a small white robot wired into the computer responds — it drives in circles, lights up, or turns a certain direction — based on the users on-screen design. The robots come from a third-party manufacturer in Pennsylvania and cost about $100.

Joseph Normandin, a neuroscience professor at Georgia State University, for instance, designed his robot's nervous system to move to the left when exposed to a light source. Sure enough, when he pointed his iPhone's flashlight at the robot's nose, its wheels began spinning, veering away from the light.

"Really, the innovation here is just to try and give people pieces that are like the pieces of the brain to build with," Calin-Jageman said. "As they build with them they get a better understanding of how brains work."

Calin-Jageman's program includes the three types of neurons — motor, sensory and relay — and offers each user complete freedom and creativity. Sensory neurons receive outside stimuli like a poke from a finger. Motor neurons convey messages to muscles. And relay neurons act as bridges between those two types.

"As you can see, it is plug-and-play," Andrew Maurer, a neuroscience professor at the University of Florida said, referring to the computer program. "As a teaching tool it is phenomenal. You can take this to an elementary class or a graduate-level class or anywhere in between."

Calin-Jageman in May demonstrated the program to a group of third-grade students at Oak Park's Irving Elementary School. The idea, Calin-Jageman says, is for students to "get their feet wet" and expose them to some neuroscience concepts. Then, an interest in the field may follow.

"When you think about something like neuroscience, it can feel really intimidating, so the goal with this activity is to make something that you can really see and feel and experience for yourself," Calin-Jageman said. "It becomes really tactile, really emotionally engaging, especially when you see your robot moving around. It's that physical and emotional connection that helps build curiosity in science."

This is the first time Dominican has hosted the event, which happens every three years, and Calin-Jageman said he was proud to be part of it. The first workshop was held at Davidson College in 1995.

As reported by Wednesday Journal at the time, Dominican first created its neuroscience program about a decade ago, with the construction of its science research building, Parmer Hall, in 2007.

"We all have these memories that we keep with us for a lifetime, they are so important to our identity but we don't really understand well how those actually get stored in the brain." Calin-Jageman said. "That's the basic thing that gets me really excited and curious, is trying to figure out why."

His preferred research subject — sea slugs — are desirable for a few reasons. The slugs, which are several inches long, have relatively large brain cells. The cells are about 1 millimeter wide and can be seen by a naked human eye.

On top of that, a sea slug's brain has roughly 10,000 neurons. A human brain, by contrast, has around 80 billion. The easily visible and relatively simple brain structure, then, is easier to map out than a more complex system.

"The sea slugs are just a great way to try and think about how those memory systems work in an animal that started off relatively simple," Calin-Jageman said. "And hopefully [the sea slugs] can teach us some lessons for the really complicated animals we've become."

William Dwyer Jr. The current occupant of the White...

I live on South Blvd a few blocks away from Pieritz...

On: Pieritz calls it quits

Thank you again Cat! You are truly inspiring!

To be fair, viruses don't have a moral compass....

Four of our now-adult children had Mr. E as a...

Good to see you're intolerant of...

To be fair, risk of infection outdoors is low. And...