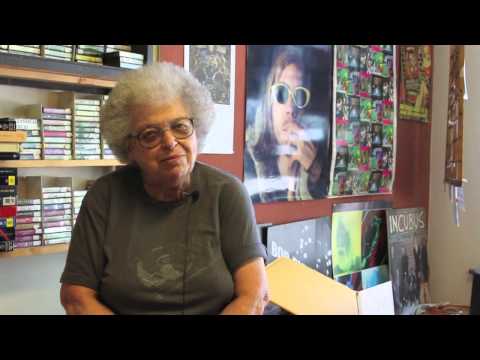 There's one place in Oak Park the music hasn't died, all thanks to one woman.

Local music aficionado Val Camilletti, longtime owner of Val's Halla Records has offered a haven for enthusiasts of nearly every genre who want to share in her one true love.

"It's all about the music," Camilletti said.

That will be the center of this year's hallaPalooza, a tradition dating back decades where patrons flock to the store and listen to live music, enjoy food and drinks, and browse through the eclectic mix of records and CDs Camilletti has made her pride and joy. The celebration, as much for the community as it is for her, marks a memento for more than just the store itself.

Camilletti, who is soon to turn 72, said it's been 50 years since she joined the record retail industry. Shayne Blakeley, the store's sole employee, is celebrating his first decade at the store.

Oh, and there's that other mark — Val Halla's 40th anniversary.

"We wanted to celebrate in a way that more than ever was about the music," she said. This includes looking back on the countless acts that have made the small window-front stage at the store a concert venue. "It's become pretty special."

Eleven bands will hit the stage starting at noon this Saturday, July 28 and running through Sunday. The event isn't geared toward just customers, Camilletti said, as she wants anyone who loves music to drop by. Customers though, will get 40 percent off merchandise in honor of the anniversary.

A variety of music memorabilia will be auctioned off throughout the day and profits will be donated to Oak Park's Animal Care League — Camilletti's second love.

"I've always welcomed animals as much as people [into the store]," she said. "Life is all about music and animals as far as I'm concerned."

But of course, it's also about the people, those who've joined Camilletti by walking the colorfully decorated rows of records — divided by genres marking the cultural eras and tales of historical changes in America — that together share the story of Val's.
Anyone like Camilletti who knows music, an expert by every definition, knows the quaint store at 239 Harrison is in a category of its own. The industry has shifted drastically in the shop's history, but the same vibe remains constant at Val's.

This includes the decked out Elvis shrine that's found a permanent home in the store's bathroom, and the life-size Beatles poster near the entryway that was bought in its prime for $1.99.
Like any store owner it's been a whirlwind the past 40 years, full of ups and downs, but for Camilletti, she isn't slowing down anytime soon.

"Sometimes I can't believe it," she said. "Sometimes it feels like 140 years — depending on the day."

Camilletti knows, despite a changing industry, the essence of what brings people together for music remains the same. Only the mode of delivery has changed, a factor she thinks won't ever diminish people's love for the art. For her, it's talking about it, sharing it, loving it and living it.

That's a philosophy that will be heard at this weekend's festivities. The event commemorates a time spent with the "Val's halla family," with a number of people who've supported Camilletti from before the store opened. It's a group that loves everybody, she said, and one that deserves a party.

"Anyone who makes 40 years of anything these days — just of life itself —  should be celebrated."

Dear mrs Val, I'm a Camilletti too! I live in Italia, and I'm a musician. I hope to meet you, one day. Love from Italy Ciao Mario

Diane Kristy, yes, I have been to Val's on Harrison street. When Val was being kicked out of her place on South Blvd., she said she wasn't even sure if she would re-open, but I'm glad she changed her mind. She does not have the traffic she had on South Blvd., but she is fortunate to have very loyal customers.

Q, have you been to her new store? It's ever better! Not QUITE as close to the el as the last one, it's still within easy walking distance. AND there's a STAGE - indoors, not dependent on whether or not it's raining or snowing or freezing outside. Check it out!

Yeah, Val! Proud to kinda know you, proud your shop is in our town!

I use to love to go to Jamie's Restaurant for breakfast on Saturday mornings and then over to Val's Halla to buy an album or two back in the 80's,

I'm glad Val decided to open up again after she was kicked out on South Blvd., and the building has been sitting empty for years, and I'm sure that effected sales to Val's Halla. Why did they kick her out, and who was that because that place was a perfect location and was really part of Oak Park.

Bill Dwyer Jr, your past writings have been very...

People haven't heard the last of this.

Corey Gimbel In my opinion the only way to make sure...

Rob Ruffulo to be fair, he mentions it is not relevant...

@Ray Simpson: I couldn't help but notice the...

@Jason Cohen: I'm curious why you have eliminated...

Jason Cohen it does not appear there are a lot of...

Kevin Peppard you missed some other politicians or...