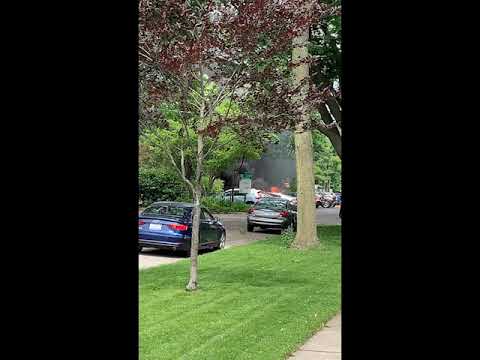 A car linked to an attempted looting incident at a jewelry store on Marion Street wound up on fire Monday afternoon in a village parking enclave on Randolph Street just off Austin Boulevard.

Oak Park police responded to a report of display windows being smashed and merchandise grabbed at Ecokarit Jewelry, 131 N. Marion St., at about 2:30 Monday. Two women were seen removing merchandise and then leaving the scene in a Jaguar. That car was followed by police who saw its speed decline and smoke coming from the front of the car.

The car wound up in the Randolph parking enclave where it caught fire. That fire spread to a Saturn parked just next to it. The Oak Park fire department extinguished the blaze. The cause of the fire is undetermined said an Oak Park fire official at the scene.

The driver of the car was taken into custody at the scene of the fire. Subsequently the owner of the jewelry story was unable to identify the suspect.

The signers of The Declaration of Independence were...