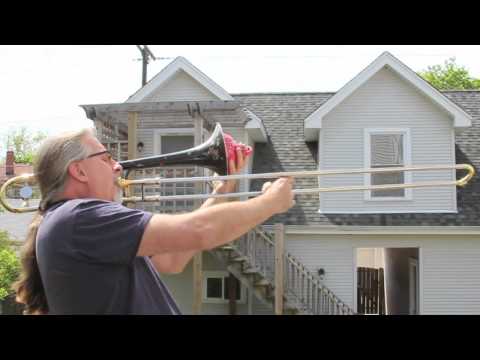 Brassy: Scott Fisher and fellow jazz band alums will reunite to honor their founder next Wednesday.

Brassy: Scott Fisher and fellow jazz band alums will reunite to honor their founder next Wednesday.

Besides the iconic rock stars, there's one musician who's proven that even after he's gone, his music didn't die.

Oak Park resident Scott Fisher can attest to that.

He was one of many who learned under the guidance of Bill May while Fisher was a student at Ridgewood High School in Norridge. That's where Fisher got his start as a jazz trombonist.

May started a band in 1977 that's known today as Jazz Community Big Band – an ensemble made up of 15 to 17 guys. May was a mentor to all, united guys with a variety of talent and played with them for nearly 15 years, until his death in 1991 at the age 37.

Twenty years later, his students joined together for a concert in honor of the 20th anniversary of his death. They'll continue the tribute at another concert, this time at the venerable FitzGerald's, 6615 Roosevelt Road in Berwyn, from 8-11 p.m., Wednesday, May 16.

"All big-name bands perform at FitzGerald's. It's a little bit of a milestone," said Fisher, who makes a living as a carpenter based in Oak Park. "If you play at FitzGerald's, you've hit a mark."

The band, which started in a church basement, was the launching point for some who have gone on to play around the world. A number of the members took that 20-year time away from the group to play with some notable musicians, including the Ray Charles Band, Frank Sinatra, Joe Cocker, Maynard Ferguson, Duke Ellington and Buddy Rich.

The experience showed at their fall reunion where the guys picked up where they left off.

"The band is better now than ever," Fisher said. "When Bill was laid to rest 20 years ago, the music essentially was too."

Two decades later, however, some things never change. He said the guys still feed off the same jokes, know how to put together dynamic music, and don't lose sight of what's important.

"It's a fun bunch of guys who are having fun and not taking themselves so serious," Fisher said. "But they're going to have fun making fun music."

May's sister, Marianne, said when she realized the 20-year-mark following Bill's death was approaching, she knew a tribute was in order. Since music was his life, she couldn't think of a more fitting event.

"I thought boy, if I don't do this now, it's never going to happen," she said. "And people really came from across the country. … The whole undertaking really has been a community effort."

May never had the chance to play at the local pub, but the former students, who are now into their 50s, will pay homage in the best way they know how – keeping in mind what May would have wanted.

"It's a great way to start a new era," Marianne said.

The concert carries on May's legacy, but it also keeps his vision going in a way Fisher thinks he'd be proud of.

"We're always asking, 'what would Bill do?'" he said. "How would Bill want it to sound?"

That fundamental question, however, translates beyond music and has provided the men with a plethora of life lessons they took from May's teachings.

"He's never really left," Fisher said. "He's even had children named after him."

Over the years the band members have gone through a lot together, and though they didn't officially rekindle until last fall, many of them made it a point to stay in touch.

Loyalty, Fisher said, was one quality May passed onto others.

"A bunch of us stuck with it, due to loyalty to Bill. He was the kind of guy who instilled fierce loyalty. To know him was to love him," Fisher said. "He was a touchstone, so to speak; everything revolved around Bill. [He was] a natural-born leader."

Would like to get in touch with Scott Fisher , if its the same Scott ,we worked many years ago with Latin Band . Hope to hear from him

It should be easy to find the stolen ceramic chicken....

Rob, spot on: "Everything that happens in OP...

John, Thank you for sharing this beautiful reflection...

On: My Miss Wright changed my life

speaking just of that block of OP Ave by Grape Leaves,...

On: Outdoor dining on Oak Park's...

I had written something up that agreed with Michael....

Chicago has been really terrible and unfair to its...

William, the progressives stance on density is pretty...

About time there was movement away from the...

Great comment Tom. How about focusing a few minutes on...