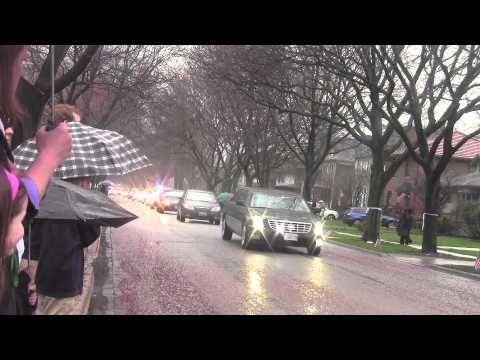 Mary Beth Smedinghoff and her husband Tom put their hands over their hearts as they watch pall bearers carry away the casket of their daughter, Anne. David Pierini/Staff Photographer

A woman standing outside St. Luke Catholic Church in River Forest pauses and puts her hand over her heart as she watched pall bearers bring the casket of Anne Smedinghoff up the church steps. David Pierini/Staff Photographer

Roberta Ferrante strokes the cheek of her son, Dominic, 6, as they wait outside St. Luke Catholic Church for the funeral procession. David Pierini/Staff Photographer

Mourners comfort one another after the funeral. David Pierini/Staff Photographer

Joe and Kelly Spillane, both of River Forest, wait for the funeral procession to pass by. David Pierini/Staff Photographer

Dozens of people braved the rain to line the streets for the funeral procession as it made its way from St. Luke Catholic Church to the cemetery. David Pierini/Staff Photographer

Last week's funeral service for River Forest resident Anne Smedinghoff, the 25-year-old diplomat killed in Afghanistan earlier this month, was met with tears of grief but accompanied by laughter as her father, Tom, shared stories about his daughter.

At a crowded Mass at St. Luke Church on Lake Street, April 17, with an overflow crowd watching from the nearby gymnasium, Rev. Kenneth Fischer, Undersecretary of State Patrick Kennedy, and Anne's father all spoke about the life of the vivacious, thoughtful and bright young woman.

Tom Smedinghoff started by thanking those from the community and strangers from around the world for the overwhelming support shown for their family. Between the white ribbons on nearly every tree in town to the influx of messages, the family has been comforted, he said. They even received a message from a Vietnam veteran asking for their address so he could mail one of his two Purple Hearts.

Following the traditional Roman Catholic service, two eulogies focused on who Anne was and what she did for the world.

"Anne was a quiet but very confident girl with big ambitions," her father said. "She had a quiet and confident resolve about what she wanted and how she wanted to get there."

She always had a smile on her face that could make anyone's day, he said, noting her compassion for others and how she brought that quality to her work in Afghanistan. He also recalled when she was young and laughed about the 3-year-old who would negotiate about eating her vegetables.

Always an independent woman with a zest for life, she went skydiving in college (without his knowledge) and participated in a 4,000-mile, cross-country bike ride for charity. He also remembered logging onto Facebook and seeing a picture of his daughter with a boa constrictor around her neck.

"I thought, 'Oh, we've got to talk about that one," he said, to general laughter throughout the church. Anne was full of adventure, he added. She once rode her bike through the desert from the Dead Sea to the Red Sea.

"We lived vicariously through Anne," he said.

Rev. Fischer, St. Luke's pastor who led the service, said Anne was a wonderful, generous and bright young woman whose empathy was revealed in all she did. He spoke highly of her commitment to service, faith and her community.

"Though her years were few, her love was great," he said.

Kennedy offered a perspective from the State Department, where she'd earned great respect in just her three years of service. He spoke of Anne assisting Secretary of State John Kerry on his visit to Afghanistan, which she was specially selected for. She volunteered to go there because she believed she could make a real difference.

"In a class of bright and ambitious foreign service officers in training, Anne stood out as a superstar in the making," Kennedy said. "Anne loved her work very much. She had that real gift of infusing optimism and joy in the work we did. … Anne truly represented the best of us."

She knew what was getting into in Afghanistan, Kennedy said, but that only made her want the job more.

"Our best and our brightest do not join to sit behind a desk," he noted. "They join knowing there will always be a risk. … Anne could have chosen anywhere, but she was committed to pushing herself, bettering herself and bettering the world."

Kennedy said she plunged into life at the embassy, always keeping busy with activities. She organized a soccer team, and helped many organizations. She even appeared on a television program around Thanksgiving to talk about customs that the U.S. and Afghanistan shared.

Anne's duties as a foreign services officer included promoting peace and supporting prosperity while advancing interests of the U.S abroad, but she took her job to another level, Kennedy said.

One example was the rock concert she organized for young musicians who, because of strict cultural restraints, had never taken part in such an event. Kennedy testified that many Foreign Service members who knew Anne said their lives wouldn't be the same.

Celebrations of her life have now been held on three continents, Kennedy said, which "speaks volume for her character." Messages have come from people around the world about how she touched their life.

It was in eighth grade that Anne declared she wanted to be a diplomat, her father recalled. Her interest in foreign policy and politics grew at Fenwick High School and grew into a passion at Johns Hopkins University.

Anne was blessed with intelligence, he observed, but she also had a strong work ethic. Once while he was on a business trip in D.C., Anne traveled from Baltimore to meet him for dinner and at 9 p.m. revealed that she had two papers due the next day on books she hadn't read. She got them done with 20 minutes to spare, he said, and later e-mailed him that she'd gotten A's on both.

"She loved that last-minute environment," said Smedinghoff, who suspected that's what drew his daughter to work in the State Department.

"She really belonged in the Foreign Service," he said. "She had a strong commitment to make the world better." This included working with organizations that helped young children and women.

Anne was killed April 6 while delivering books to a school when her group was caught up in an incident the State Department labeled a Taliban attack.

She volunteered for the assignment because she believed that's where she could make the most difference. She couldn't "walk on water" like one might believe after reading many of the media articles following her death, Smedinghoff said. She did things that were memorable and had an impactful.

"She did a lot of things that in many respects were very simple things, but very meaningful and very, very important," he said. "We're just so very proud of what she was doing and all the great work."

Her father concluded by talking about how she'd chosen the name Claire as her confirmation name, in honor of St. Claire, who was known for helping the poor.

Tom concluded with a portion of the Prayer of St. Francis of Assisi, which he said showed who Anne was.

"Let there be peace on earth and let it begin with me," he read.

A motorcade through River Forest followed the service. Even in the harsh wind and rain, people lined the streets to pay their respects.

WOW, what arole model Anne is for all of us.IWe have 9 children and 14 great grang children . All of them share her passion to let there be peace on earth and letit begin with ME. Amen Anne, God is smiling with you.

Thank you for coming by to cover this. It was a sad day, but a remembrance of a wonderful life.

Thank you for posting; a very sad day indeed.

@Another Oak Park resident from Oak Park I'm happy to educate you on the title diplomat. Here is a link that explains that a foreign service officer is considered a diplomat, and it's not an easy position to get!http://careers.state.gov/officer

Sincere condolences to all who grieve. ... can't help but wonder how any 25-year old can possibly be considered a 'diplomat'?

I passed St. Luke's as people were arriving for the funeral mass. I couldn't help but notice the angry looking sky followed by the heavy raindrops. It felt like the heavens were crying for this soul, or maybe for us. May she rest in peace.