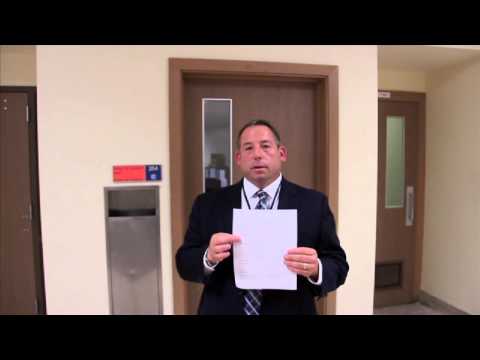 See OPRFHS's Director of Campus Safety Randy Braverman explain where to find your lost items at 2:13.

Before Christmas break at Oak Park and River Forest High School, 59 students reported their phones, iPads or calculators lost or stolen, but only five of those incidents were reported to Oak Park police. And police reported only two thefts in crime summaries given to the newspaper.

The number of missing devices categorized as thefts at the high school that end up in Oak Park police media summaries dropped from eight in fall 2013 to two in fall 2014.

OPRF Director of Campus Safety Randy Braverman said it's up to the parents or students to report thefts to police, not the high school. Braverman, who started last year, said he has revamped the process to report missing property.

"We keep good track of accountability," Braverman said. "I look at the cameras and watch videos. We investigate each case thoroughly."

If parents want to file a police report, they speak to the school resource officer.

"We're not doing anything differently from last year [to] this year, to be honest," he said.

Students fill out a missing property form, which is scanned and distributed to staff and the police officer assigned to the school. Wednesday Journal obtained copies of the fall semester theft reports through a Freedom of Information request.

Of the 59 devices reported missing in the fall, 20 cases were "solved" according to records. Even so, Braverman has a special safe in his office filled with valuables turned in by students and staff.

The careless nature of teenagers contributes to the problem, he said.

"Sometimes students can't even tell me where they lost the phone. Then our hands are tied," he said. "A teacher might find a phone in the bathroom or the halls, and we hold onto it here."

At the end of the semester, Braverman turned 17 unclaimed phones over to Oak Park police. So far during 2015, he's placed seven more devices in his safe.

Unclaimed calculators and eyeglasses are donated to a group that serves homeless students, he said. Seventeen bags of lost and found clothing were donated to the Economy Shop at the end of the semester.

Braverman even made a school video telling students to look for their lost property at the school welcome center.

Three years ago, teenage theft ringleader Pawel Borowski-Beszta was arrested with a cache of 150 cell phones, calculators and other devices. Oak Park police and the high school have said they are working together to increase transparency about thefts at the high school.

But fewer parents appear to be reporting the thefts to police or even to the school.

Freshman Tom Barron had a $150 graphing calculator go missing and his parents just replaced it. His older siblings lost calculators and phones during their time at OPRF.

"We've lost so many calculators and bikes, we don't even report it," said his mother, Dina Barron. "It's so rampant over there, we just buy lousy bikes."

Craigslist does a brisk business in graphic calculators, she found out, and some are clearly stolen.

"When you call someone who says, 'Meet me on the corner," or 'There's name scratched off on this [device] because it used to be my cousin's,' you can figure it's stolen," she said.

Braverman said he continues to work proactively to keep track of missing items.

"We're doing every possibility of getting things back to people; I've been very proactive," he said.

He added that some of the missing devices might have been found and the school never found out.

"We do everything we can, we don't hide anything," Braverman said.

BIG P - Good reminder. If I remember correctly, Borowski's drug-and-theft ring flourished at the high school for years, and two of the adults involved were sons of an OPRF security employee. Borowski and his friends were caught with drugs, stolen goods, and guns. The school was less than open about the relationship between the criminals and school security.

Parent: Look at the language in the article. The school is more than likely placing the onus on the parent because they have too many of these incidents to investigate them all, especially seeing how many of them are the result of carelessness. 17 unclaimed phones were turned over to police last semester. One too many parents have jumped on a bandwagon of finger waving at police and school officials to find their student was not honest about why they are missing their belongings. Think first.

let us not forget the young drug dealer who was found with many phones and calculators that were traded for drugs, but claimed to have been stolen. What is worth looking into is are the missing items missing in order to acquire drugs? either by the rightful or wrongful owner? probably worth looking into, mr. head of security. search Pawel Borowski-Beszta in oakpark.com. I think high school security guards were involved.

At a school of nearly 3500, we are going to nitpick about lost and stolen phones? How about parents who send their kids to school with $500 phones. Kids who don't watch them closely and leave them out and about?

I think the term was mandated responders, where ER were required to notify the police and the police must respond to investigate acts of domestic violence. Here a reverse telephone call through the school to the police to the parent is not considered. Parents of all kids at underaged drinking parties are notified by mail or phone. How many domestic batteries , assaults are handled at the school level? Report all offenses to the police dept., not resource off.,get a report #,sign a complaint

Interesting that the high school, which has been known to complain about over involved parents, now say that reporting something that happened at the high school is the parents' job. But they need to report it to the school resource officer (not the police department)? Hmmm. I also am curious about when kids are supposed to check lost and found, given Rouse's tight regulation of when kids are allowed in the halls and how quickly things close down once the school bell rings.

Bill Dwyer Jr, your past writings have been very...

People haven't heard the last of this.

Corey Gimbel In my opinion the only way to make sure...

Rob Ruffulo to be fair, he mentions it is not relevant...

@Ray Simpson: I couldn't help but notice the...

@Jason Cohen: I'm curious why you have eliminated...

Jason Cohen it does not appear there are a lot of...

Kevin Peppard you missed some other politicians or...