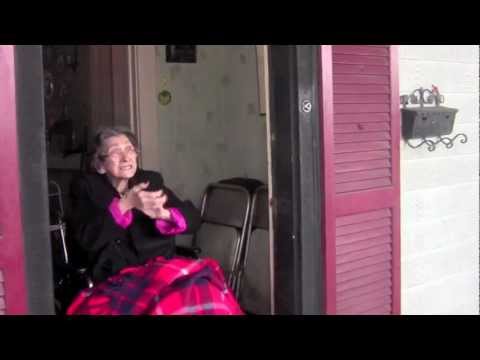 Mildred McDonald brushes her cheek with flowers she received from the more than 400 students at Ascension School, who gathered outside her Scoville Avenue home last Friday to sing on her 100th birthday. David Pierini/Staff Photographer

The Oak Park Fire Department blocked off part of Scoville Avenue so that the students of Ascension Catholic School could line up and sing Happy Birthday to Mildred McDonald for her 100th birthday. David Pierini/Staff Photographer
< >
< >

It's not often that 400 children gather around your porch to sing "Happy Birthday."

Students from Ascension Catholic School, along with two Oak Park Fire Department trucks, assembled outside of Mildred McDonald's home Feb. 8 to honor her 100th birthday. After singing to her, many of the students gave her hugs and pink flowers as she sat on her front porch.

"Mildred is part of the community that defines Ascension," said Principal Mary Jo Burns. "Her focus has always been on the children, their education and formation."

McDonald, whose children attended Ascension, has stayed involved with the school for the past 30 years. She was asked to become a volunteer preschool assistant in the early 1980s, a role that Burns said she filled for many years. "She started working at Ascension when my daughter, Kelly, began kindergarten," said Mildred's son, John McDonald. "She's always been associated with Ascension School, helping out where she could." Burns said McDonald has supported Ascension students even with small acts, such as sending religious gifts to the school's second grade students during their First Communion and donating to the school's annual Lenten mission programs. "Every Halloween she'd make popcorn treats for the whole school," said Mary Ann McDonald, Mildred's daughter-in-law.

The school held a large celebration for McDonald's 90th birthday as well. It's a natural since Mildred and Ascension are the same age.

"She is a shareholder in our work to bring children up in the faith, to welcome them into the parish community, to form them as good citizens and to teach them to do good," Burns said.

Congratulations and our very besf wishes to Aunt Mildred.

On: With pastor in hospice, church...

I'm sure Mr. Christian is a fine man. During my...

On: Percy Julian gets new principal

Before we get to sacrosanct, lets recall that dealing...

@Bruce. The contracted version is simply this... all...

Bravo for joining two current biases that are so...

On: Anti-ageism should partner with...

Is the outpouring of student sentiment unique to...