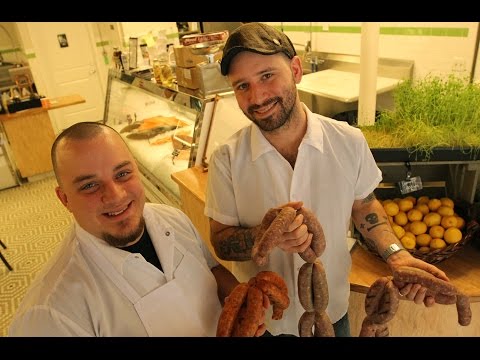 Carnivore opened late last summer, and we've been there a few times to pick up meat and fish. The boys at Carnivore now also offer lunch. Stopping in for a sandwich is a good way to sample their hand-crafted wurst.

We recently had a sandwich of weisswurst and a sandwich of Andouille sausage, both very good and made-in-house, like just about almost everything else that's sold at Carnivore.

Weisswurst, or white sausage, is mild and covered in sweet mustard with a drape of very soft, tender and only mildly acidic sauerkraut. Weisswurst is sausage with a heritage going back a century and a half to Munich. As the story goes, a butcher in the Bavarian city was preparing to make bratwurst when he discovered he didn't have all the ingredients he needed, so he threw together what he had: veal, pork, bacon, onions, salt, pepper and lemon powder. He called his creation weisswurst, and traditionally this sausage is served in a bowl of hot water, to keep the wieners from cooling down. The sausage is sometimes even squirted out of its skin before it's eaten. At Carnivore, it's cooked on a stove and served in a bun, sliced down the center so the meat is more evenly distributed (a simple move that makes all the difference when eating a sausage sandwich).

Andouille, a sausage usually associated with the Cajun culinary tradition in Louisiana, is French in origin, and it traditionally incorporated offal like chitterlings and tripe, though none of those meats were in evidence in Carnivore's version. Served in a bun, we had this sausage with peperonata, a slightly spicy blend of stewed peppers and onion. This is not exactly a spicy sausage, but it packs a lot more spice than the weisswurst, and for that reason I liked it a little more.

Both sausage sandwiches were eight bucks apiece and very big. As Carnivore offers a rotating list of sausages, you can have them make you a sausage sandwich with any sausage in the cooler. Other menu items include a pulled pork sandwich and a hamburger, all made to order.

An old client of mine used to rave about the pizza puffs at Pete's Red Hots at the corner of Ridgeland and Roosevelt. I went there thinking I might give the puffs a try, but ended up having the Greek Chicken Dinner. It was about 10 bucks for half a chicken, fries, bread and salad — a fair price.

The chicken, dusted with Greek spices like oregano and black pepper, was wonderfully luscious, very juicy, rich and tender. As I dug in, I thought to myself, "No way I eat all of this." But I did. It was that good.

Pete's is the sort of place that looks like it might cater to a late-night clientele, but even the noon crowd was lively and gregarious: a good-natured bunch of roadway workmen in their yellow vests joked around, cops swaggered in and adjusted their weapons as they perused the menu, and a few mothers and kids shared various lunches. I liked being there.

My experience was way different at #1 Chop Suey on Chicago (I'm not going to give the address because I don't think you should go there, but it's on Chicago Avenue). I stopped by to check out the egg foo young (research for a pet project of mine) and was served what was by far the worst representation of this dish I've ever had: it was tough — yes, actually hard to cut through — and the egg mixture had very close to no flavor at all. They didn't include the promised egg roll with my order but, really, I can't believe I missed anything.

What was most surprising about #1 Chop Suey was that it was very busy, mostly with people coming in and grabbing food and leaving to eat somewhere else. Maybe the location is convenient, or there's enough traffic going by that it attracts a lot of people. Whatever. The popularity of this place is inexplicable. And while I'm not suggesting that counter people should be constantly grinning at me, it did strike me as strange that not a single person there seemed to doing anything other than frowning. I did not like being there: weird vibe and bad food.

On: Neighbors sue Oak Park over...

Wait a minute! Honestly I hope they dont get it until...

On: Neighbors sue Oak Park over...

On: OPRF boys hoops rewarded for...

On: Out with the old, in with the new

William Dwyer Jr. He has been removing protected land...

These "gifts" are not broad-based. The money...

On: Rec center campaign gets two...

There is a variety of photos in the newspaper. The...

On: From Oak Park to Oak & Heir

Would have been nice for the Journal to have a photo...

On: From Oak Park to Oak & Heir