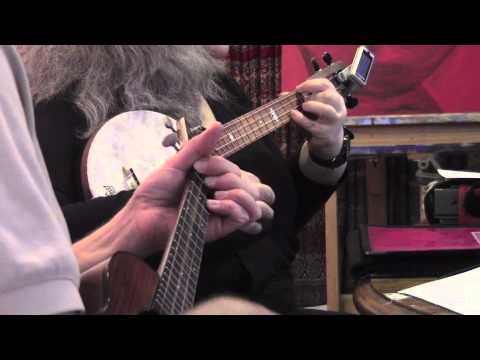 Ukulele Bob, left, and Jonathan Pederson were among the more than 20 who gathered for a ukulele meet-up at the Eastgate Cafe in Oak Park. The group meets every Thursday evening. David Pierini/Staff Photographer

Beatle George Harrison (right) is memorialized on a ukulele at Harrison Works, where the club meets. David Pierini/Staff Photographer

Lorelei Sikorski Hareas walks in as Larry Vitalo and Liz Gaylord play a number together. The club is generally made up of six or so devoted ukulele players. David Pierini/Staff Photographer
< >
< >

The spirit of "Aloha" pervades the subterranean space at Eastgate Café on Thursday nights, its tables occupied by an assortment of players, all armed with ukuleles. They are members of Wonderwall's Oak Park Ukulele Meet-Up Group, which was founded by GiGi Wong-Monaco, the native Hawaiian who formerly operated the Wonderwall Music Emporium on Harrison.

This diminutive member of the guitar family is enjoying another surge of popularity, which GiGi attributes to the instrument's "ease of playing and its sound."

"It's a happy sound," she explained. "It brings a smile. It gives people an upbeat, positive feeling." These warm sentiments were certainly in evidence at the club's most recent gathering. Fifteen musicians came from the far reaches of the Chicago area to strum, sing along and smile. They were led by Chris McIntosh on her banjolele, the offspring of a ukulele and a banjo.

GiGi passed out songbooks and the ensemble launched into "I Wanna Hold Your Hand." Beatle songs, it seems, are particularly suited to the ukulele. "George Harrison had a house on Maui and composed songs on the ukulele," GiGi said, "The Beatles embraced the ukulele."

The meet-up group continued through its catalogue of selections, everyone strumming in synch. They played old blues songs like "Midnight Special," songs from the Big Band era like "Sentimental Journey" and McIntosh's favorite, "Button Up Your Overcoat." For "City of New Orleans," McIntosh passed out boxes of Good 'N' Plenty to be played as rhythm instruments. The candy boxes also came in handy during their ode to "Choo Choo Charley."

GiGi and her sitar-playing husband started the meet-up group in October 2008, shortly after Eastgate Café opened. "We started with four people and played 'I Saw Her Standing There,'" she recalled. "We provided song sheets with a great variety of songs." The group has grown considerably since then.

"They come out mainly to have fun. It's 'therapy night' for some, 'leave the kids at home night' for others." Not that children aren't welcome. An 8-year-old and an 11-year-old girl sometimes attend. "It's open to anyone, from beginners to pros."

GiGi falls in the latter category. She teaches ukulele lessons and helps operate one of the biggest ukulele dealers in the area: Wonderwall's Show Room, which relocated from Oak Park to Chicago Heights. She noted that the tiny instrument has exploded in popularity in the last five years. "You hear it everywhere. Rock musicians like Eddie Vedder, Steven Tyler and Elvis Costello are playing it. The ukulele makers are backlogged with orders."

The popularity of the ukulele has waxed and waned from the time it was introduced to Hawaii in 1879. It was brought there by Portuguese workers who were recruited to work on the pineapple and sugar cane plantations. The four-string instrument was embraced by the islands' royalty. Queen Lili'uokalani coined its name, combining the Hawaiian word for "gift" (uku) with the word meaning "to come" (lele). She called it, "The gift that came here."

The instrument became part of Hawaiian culture and was incorporated into school curricula. "All the keiki (children) had to learn the ukulele," GiGi recalls. "I learned it in first or second grade." She grew up in a fifth-generation Hawaiian family in Honolulu. She lived a few minutes from the place where Barack Obama was raised. She attended school with his sister, but he was two years younger and she didn't know him. She did, however, frequent the Baskin-Robbins where he worked. She and her ensemble were later booked to play in connection with Obama's inaugural on live TV.

"It was so cold, we were wearing snow boots and Hawaiian shirts."

Following its initial splash in Hawaii, the ukulele arrived on the mainland and became one of the icons of the Jazz Age. It became briefly famous again when Tiny Tim played it on his 1968 hit, "Tiptoe through the Tulips." The latest craze can be traced back to the 2003 medley of "Over the Rainbow/What a Wonderful World" by Israel Kamakawiwo'ole. GiGi's interest in the ukulele has also ebbed and flowed over the years.

"I played it in high school, but then there was a long gap."

She became occupied with college and marriage then moving to Chicago 17 years ago. It wasn't until her teenage son left his ukulele behind in Hawaii that she picked up the instrument again. ("I think I still remember how to play this.") When they opened their emporium in Oak Park, they had 2-3 ukuleles hanging on the walls. Their new showroom features 50.

"We try to find the right size for the individual," said GiGi. "Learning the chords is easy. Soon they're singing their hearts out." The meet-up group has become an "ohana" (family). They also have an offshoot — The Harrison Street Players. They're a performance group, made up of dedicated members of the meet-up group. Every August they enter the Battle of the Bands. Everyone looks forward to their appearances at Beatlefest.

She noted that there are strong ties between the ukulele community and Beatles fans. "Terry Hemmert became an honorary member of the ukulele group in 2009," GiGi noted. "She plugs our appearances on the radio. We sell sitars, ukuleles and incense at Beatlefest." GiGi's goal is to assemble the world's largest ukulele ensemble on the Beatlefest stage. "We had over a hundred players in 2009 but we didn't break the record." Their ensemble has been joined by musicians from the Cars, Hudson Brothers and The Rutles.

Meanwhile, she and her husband now commute an hour every Thursday to lead the group. The Eastgate Café is the perfect relaxed venue. Owner Pat Dailey is grateful for the steady business, and it has increased his admiration for musicians.

"It's a safe environment for newbies," he noted. "The ukulele has a unique sound. It's a relaxing sound, not blowing anyone away. It's contagious." He recalled an outdoor stage filled with ukulele players in September 2012 and estimated that the group has grown to 130 members. Some travel from Elmhurst, Des Plaines and Orland Park.

McIntosh continued to lead the group, everyone strumming and singing along. She played the intro to "Hitchin' a Ride" on a kazoo shaped like a saxophone. The group tore through "Helter Skelter," segued into "Leaving on a Jet Plane," and finished up the two-hour session with "Ode to Joy."

The group is starting to get some media attention, as the Chicago Tribune has published a piece about them. "WGN TV is going to film our holiday party on December 13," GiGi said.

"I'm proud to share the culture I grew up in," GiGi said. "I'm happy to make other people happy."

The Thursday Ukulele Meet-Up at the Eastgate Cafe is truly a highlight of my week ... I say TGIT! You can't be sad or stressed playing the uke. Great people and great fun. Mahalo, GiGi!

I have been attending the ukulele group at the Eastgate Cafe for two and half years.It has been pure enjoyment the music and food are great but the people are the best!!!

Loved the video and the pics inside Harrison Works. What a fun place to play with all the fabulous paintings on the wall! I have participated in their group in the past and yes it's as much fun as it looks and the uke is easy to play.

Jim: My husband and I own Wonderwall Music Shoppe , opened in Oak Park in 2006. We moved to Chicago Heights this fall. Patrick: I had no control over this article, never met the reporter who conducted the phone interview with me. So I don't see how it is self-serving.

I thought the article was kinda long and seemingly self-serving but the video was cool. Makes me want to go to Harrison Works and take up uke playing

Sad news that the Wonderwall shop on Harrison St. closed. Did the owners relocate?

The title of the article is about the Oak Park Ukulele Meetup Group at Eastgate Cafe. When I was interviewed, I was not told that it would be a story about the 2 Uke groups in Oak Park otherwise the title of the story would be different. While there are many inaccuracies in this story, the opening of video and half of the photos are of the other club for which there is no affiliation and not what the article is about. www.ukulele.meetup.com/89

I loved the article. My son (14) and I have been attending the meet up at east gate since January. The start of the video isn't at Eastgate or of the meet up group. So I'm baffled by what is going on there.

FYI, the text of this article is about Wonderwall's Oak Park Ukulele Meetup Group that meets at Eastgate Cafe in Oak Park every Thursday from 7-9pm. The pictures and video, however is mostly of an unaffiliated group. Very confusing.

Correction: I did not say I attended school with Barack Obama's sister (Maya) in Hawai'i; I lived just a couple minutes away from where he lived. Actually, my cousin in Hawai'i knows Maya, their kids go to the same school.

The article is about the meetup group which meets weekly at Eastgate Caf%uFFFD, so why is it accompanied by photos of a different club which meets elsewhere? This is very confusing, to say the least.

Who knows... but he is getting more attention for...

When you can't significantly alter something your...

At what point will there be a crosswalk signal for the...

Scott Concertman is obviously an expert and made some...

(Wrong place to comment, sorry) But I agree about...

I'm also another senior citizen who walks just about...

Kathleen, Your first sentence describes me, too. And I...

On: Forced to walk in the streets

I wish this piece would have delved into why he...

"... the lackluster design screams of indifference to...