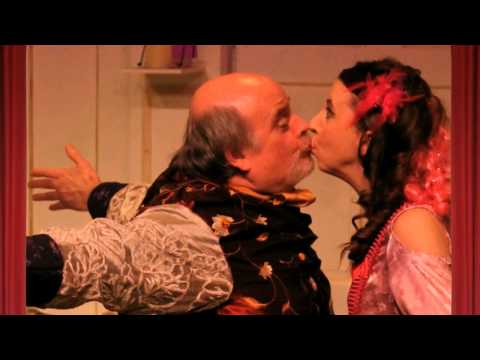 Silvia (Megan Delay) is a lovely, well-born young woman of an age at which it's considered high time to marry her off. So her father (Andy Gwynn) arranges for a suitable suitor. He talks Silvia into marrying a nobleman she's never met named Dorante (Paul Dederick). But worried that her dad may be trying to impose his taste on her, Silvia switches places with her maid Lisette (Christina Renee Jones) in order to objectively analyze Dorante's character and find out what type of man he is.

Silvia's father allows her to check him out from a safe distance when he comes to formalize their arranged engagement. Unbeknownst to her, however, when she is visited by her betrothed, Dorante has also traded places with his valet to get a better assessment of Silvia. So he arrives dressed as a valet, while his feisty, zany servant Bourgignon (Travis Barnhart) is disguised as his master. Both couples — the aristocrats and the servants — fall in love without knowing each other's true status.

The pre-revolutionary French comedy was perhaps a breakthrough in 1730 as it isn't afraid to suggest that servants' emotional lives were just as interesting as their masters (ala Downton Abbey).

The comedy works successfully because of the precision of the ensemble. The two servants are especially well-portrayed. Jones is brilliant, at times seeming to channel Carol Burnett with her excellent comedic timing and facial expressions. Barnhart, as the outrageous, at times vulgar, clown of a valet, is quite skillful with physical comedy.

Both Dorante and Silvia are disconcerted by their sudden attraction to a supposed member of the lower class. Meanwhile, it's great fun watching the glee the servants take when they're given the chance to ape the pretensions of their employers.

Dorante and Silvia fall for one another and each of the lovers believes he or she has won a partner from the other side of the class divide. This causes them extreme distress.

The father (Andy Gwynn) and brother (Shane Michael Murphy), in cahoots together, know of both these switcheroos. They hover, observing the tangled courtships with great enjoyment.

I've never read this 300-year-old comedy before nor seen another production of it, but the translation and adaptation by Stephen Wadsworth plays smoothly and accessibly.

My only criticism lies in the original material. The play comes out of the farce genre and was originally performed in Commedia dell'Arte style as a minimally involving divertissement or light amusement. It's totally predictable; we know from the opening scene how the conflicts will all play out.

It's a lot of fun but don't expect any real ideas or themes to ponder. The plot wears thin by the third act, but the actors are quite adept at this brash, clown-like style of comedy. This raucous production definitely provides diversion or escapism from the bleakness and tedium of our current endless winter.

There are three acts with two brief breaks. I would have fast-forwarded through that second intermission if it had been an option.

The amazing set by Josh Prisching is elaborately constructed from at least 16 doors, which has to be seen (and heard) to be believed. He also has an intricate system of "wagons" that slide on and off, moving props and furniture to suggest different locales. Prisching designed the warm, lovely lighting, too.

Open Door Theater is the perfect setting for this intimate production of The Game of Love and Chance. It's risque and raucous and the cast is charming.

William Dwyer, Jr.: He IS on Facebook hawking the same...

That name doesn't even come up in a Facebook...

Why do these ads for quack remedies stay on here for...

Congrats on 30 years with the Journal, Marc!