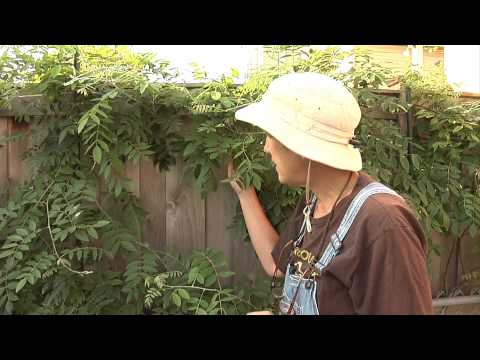 This is a common idiom: "good fences make good neighbors."

At least that's what they say.

But what happens when the fence in question is the back-side of an unfinished, six-foot cedar "wall" (your neighbor's), plus a long-standing and unsightly chain-link "dog" fence (your's)?

The rub is that now your eyesore is inches in front of the other one, and the chain link fence that has never looked good, now looks even worse.

And, in the soil galley between your fence and their's is growing a "grove" of Creeping Charlie.

To get rid of it, you have to reach under, or through, your chain link-fence and pull it without scraping your knuckles.

Initially, friends told you that the new, drab facade spanning your south property line would grow on you.

You knew it wouldn't.

Since then, over the last three years, on these two fences have been growing 4 wisteria and a hearty hopsvine i recently planted. They have been progressively establishing a "living fence" on a free-standing frame cobbled together with repurposed items that were cluttering up the garage.

The hops is happily making itself at home on the chain-link.

I chose wisteria for its aggressive growth pattern (yes, you do have to prune them), and pretty foliage, plus the delicate purple flower blooms three times a season.

I planted hops for its unusual look, rave popularity and ability to plaster a chain link fence with leaves, flowers, and berries.

At some point, we could brew craft beer, too. If I don't, I already have a few guys lining up for the flowers.

The list of climbing and twining vines that would have worked here was overwhelming. So much so, that at first I didn't know which ones to choose.

So three years ago I went to a local garden center, and they said four plants would easily cover 50 feet of fence.

This summer, when I realized I had done too good of a job training the wisteria to climb up, all my gardening buds said it was clear that hops would be a great option to grow a vine down and everywhere else to cover my chain link.

It is aggressive, though. And, I was told that hops can take over and choke out the wisteria, so at first, the idea of me growing it wasn't a done deal.

Hops weren't off the table either.

I knew gardeners who were doing exactly what I wanted to do with success.

Because of them, in late June I caught a ride to another garden center.

The hops guy there told me that in almost any backyard, with sufficient sun and enough space to grow, hops will thrive on a traditional trellis, arbor, fence, old trees, obelisks, as well as along the side of buildings. Some hops growers just let them trail on the ground, trailing 25 feet in a single season.

All that sold me.

I also learned that hops growers with limited space can easily grow the vine on a rope trellis. One of my friends is doing that.

I do know that good neighbors can make good fences.

did someone say home brew?

don't fence me in !! from Oak Park

Be glad the wood fence is not stained. Imagine living next to a 6 ft high burgundy red fence, like I do. Take down your chainlink and keep the gates at the front and back of the yard for your little doggie(s). This option gives you more (dirt) space for new plants and vines, maybe even to grow a tall hedge of bushes.

Thanks for the tips! The wooden fence is lovely and since you need to keep the chain link fence, for your doggies, those are some great ideas to naturally pretty it up. The Beer idea is a lot of fun as well. Thanks for sharing.

The Library is now under the Essential Service Model. Computer Sessions by appointment only. 30 min sessions. Call 708-366-7171 or sign up at fppl.org/computersignup. Copy machine (copy/scan) available for drop in. Vestibule Pick Up of library holds...

A little common sense would be o not elect local...

Please read this for a better and more nuanced...