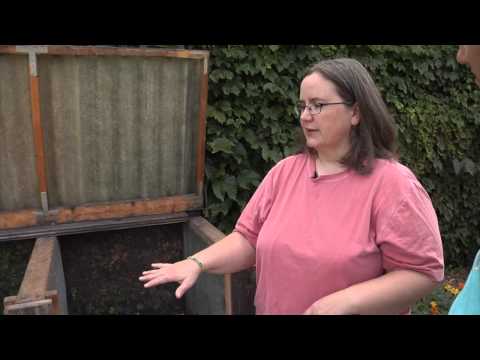 At the end of the summer I became one of Garfield Park Conservatory Alliance's 'Composters At Work' volunteers.

So, some Saturday mornings I take the Green Line el to GPC to team with a few other "brown thumbers" who have signed up to help out back by the bins in the demonstration garden.

A couple of weeks ago I saw another composter wearing a brown t-shirt with green lettering that said "Compost Just Happens."

Note to self:  Love the shirt, and it certainly does.

For me, the science of how "it" happens is really cool, in that composting is literally the controlled biological decomposition and conversion of solid organic material into a humus-like substance called compost that looks and smells like healthy soil.

Okay, I admit it.  I am a member of an on again, off again online compost study group called Deep Rot.  In a recent online chat, the topic of how to get rid of rats, or mice, in a compost bin came up.  Well, we all agreed that in urban environments such as Oak Park and Chicago, having an open compost pile, or a bin with big openings, isn't smart, safe or even an option, thanks to city ordinances that have been put into place to help prevent the introduction of mice and rats into a compost bin.

Here in Oak Park, doing it right are District 97's zero waste schools.  There is also a growing number of congregations and local businesses, as well as many, many homeowners who are making a habit of this go-to green practice.

In addition to that, since early April, the Village of Oak Park has expanded its composting program. It's now Village-wide.

Several years back I became a backyard composter when I took a composting class at Garfield Park Conservatory. Since then, I've been told that "Composting 101" classes are sometimes offered around here by the Village of Oak Park, and Oak Park Conservatory to name a few..

Even after undergoing that training, I recently was poking around my bin, wondering if my compost was completely cooked yet.

That's why I hopped the Green Line again last week.  I wanted to harvest some good composting advice from Melanie Harding, the Program Manager of the Garfield Park Conservatory Alliance, and an Oak Parker who is a compost educator herself.

From her I learned that the compost in my Earth Machines did just happen, and also that their Harvest Day Celebration, is coming up on Saturday, September 7.  At it will be simple and sustainable family-friendly happenings, including ongoing educational demos about how to make compost, raise chickens and/or tend to bees and goats in your urban backyard.

If you stop in, give me a wave:  I'll be back by the bins in my spiffy, new "Compost Just Happens" t-shirt.

Deb and Kevin, Your addressing a "control" issue is right on the money. People can get scared off composting for all the bad things that can happen. What they need to do is create an environment that sustains all the organisms that turn leftovers into jump starters. Garden composting, worm composting--these are essential steps in forming a partnership with nature and with the best intended people on the planet. Rodents have their agenda, we have ours. Let's allow for each to do their thing

The Library is now under the Essential Service Model. Computer Sessions by appointment only. 30 min sessions. Call 708-366-7171 or sign up at fppl.org/computersignup. Copy machine (copy/scan) available for drop in. Vestibule Pick Up of library holds...

It's sad in a way but the reality is that this...

A little common sense would be o not elect local...