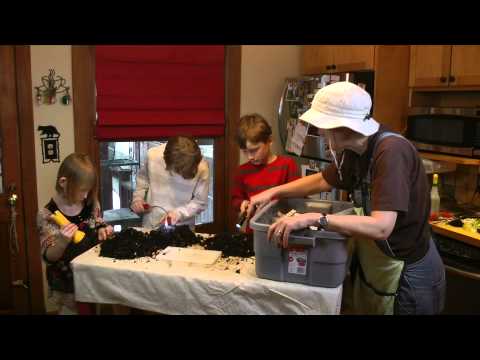 Especially for urban gardeners like me who live in small spaces, worm composting (also called vermicomposting) is a productive, fun and doable way to divert biodegradable kitchen scraps away from a landfill and back into the soil in my garden, or on to my indoor plants as a top dressing.

In my basement I use a 10-gallon Rubbermaid container to house my Red Wriggler worms that eat my garbage to produce their personal brand of homemade organic fertilizer.

I first dug into this green practice by googling The Chicago Home Composting Program brochure. I have further cultivated it with a few other sources:

A popular book: Worms Eat My Garbage and article by Mary Appelhof, an educational resource (for teaching kids) and by locating an online worm supplier:

Currently, my home worm composting operation still consists of that container. It was purchased from a big box store when three years ago I took a composting class at Garfield Park Conservatory in Chicago.

Since then, I have discovered that some vermicomposters actually build their own bins, or buy fancier ones online. Regardless how you start worm composting, your bin must be at least ten to sixteen inches deep, have holes or slits on the side or top for worm aeration, and include a tight fitting top to keep the worms in and pests out.

Initially I started by filling the bin about half of the way up with strips of shredded newspaper (no glossy pages, please), and used a spray bottle to dampen the bedding -- which they also eat -- to the consistency of a wrung-out sponge.

Next, I added a couple of handfuls of microbial-rich garden soil, dropped in about 1 pound of Red Wriggler worms into the bedding (about 1,000 worms), and then I served (buried) their first meal…about one quart of veggie peels, coffee grounds, crushed egg shells, things like that.

Without a doubt, they quickly went to work eating the scraps, making more worms, and expelling their castings, which is the super-rich organic fertilizer they produce, and I use on my tomatoes and other plants.

So, year-round my worms are in a dark corner in my basement working away, where I know that in their bin they will not freeze in the winter, over-heat in the summer, and won't become over-saturated or emaciated because they are on my watch.

About every three months I harvest the worm compost, which is what we all call "gardener's gold." I first spend a couple of weeks migrating the critters from one side of the bin (dirty) to the other (fresh fixings).

Then,  I hand pick out the stragglers.  I drop them into their clean new digs, where their friends, who are already hard at work eating kitchen scraps and expelling new castings.  I'll harvest that compost next time around.

Recently, I invited over a few of my neighborhood buds for "The Big Worm Migration" in Deb's Big Backyard. Join us

Try putting some watermelon rinds in the worm bin. The critter will devour it and leave jsu the paper thin remains of the rind. I tried hand picking the red wigglers one year and after too many hours; decided to go with topping the soil with a window screen and fresh dirt. Placing a couple of melon rinds on top of the new soil will get the worms moving in mass through the screening while leaving behind their enriched and now vacant former habitiat. Really amazing how much kitchen waste worms are able to consume.

Deb, we have composted in our back yard in Oak Park for years! We built a wood bin (10' x 3') with three stalls, and use one stall per year while the other two are churned by worms. This is very doable in Oak Park, and Triton college has some really great intro horticulture classes.

For a good article that lays out the challenges...

Thanks for this great series. One of the reasons I...

Congrats to Don (and Teri and the rest of his family.,...

While Senator Harmon I believe is a fine man, I...

Yet alcohol is everywhere and in the faces of children...

On: Cannabis is special (use)

Nick I wonder if Ms. Roberts intends to end...

Public Unions are not acting in the public good, as...

Who are the corporations in our neighborhood?...