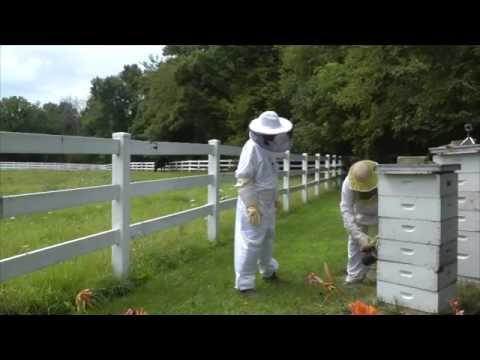 Since 2011, when having bees became legal in Oak Park, the practice of keeping a backyard apiary here has taken flight.

That is a very beneficial thing for all of us, especially considering the plight of the honeybee in the last decade or so.  The United States Department of Agriculture USDA says it continues to be a mystery, and potentially devastating, in that Colony Collapse Disorder (CCD) "is a serious problem threatening the health of honey bees and the economic stability of commercial beekeeping and pollination operations in the United States."
In addition, despite a number of claims in the general and scientific media, says the USDA, a cause or causes of CCD have not been identified by researchers.
Because of that, many gardeners are beginning to do something tangible for the bees.
Earlier this year I actually took an intro to beekeeping class , and have been filling my landscape with pollinator attracting flowers, fruits, herbs and veggies.
Recently, when I was invited to take a road trip to Wayne, IL to step into the rural bee "out yard" of Oak Park beekeeper Harry Patterson, I, of course, was all abuzz about bee-ing there.
Beforehand, I found out that Harry has been a beekeeper for 30 years, going nose to stinger with bees in hives from Kane and DuPage County to here, the County of Cook.
On Saturday, August 23, "Harry the Beekeeper" will be one of the hands on attractions in Batavia at Red Oak's Nature Center's free family event, BugFest, which he says is geared to elementary age Kids.
If you miss that, be ready to run into this award-winning teacher, and Master's-level outdoor educator year-round giving his "Life of a Beekeeper" talk at local libraries, garden clubs, nursing homes and special interest group meetings.
He also enjoys sharing his love of bees at schools, nature centers, and now with little 'ole me, an urban gardener who in that moment became mesmerized by that buzzing hum of 80,000 of them.

In Glen Ellyn formerly from OP

What a wonderful creature and creature community, the bee and bee hive. Thanks go to Harry Patterson for giving back to the community by helping the bees help us. Thank-you, Deb McCarey, for reporting on this wonderful topic, and so clearly, with the video. I'd almost rather be a productive cooperative bee truly working for a living in the midsts of natural settings than be a self-destructive human, killing any interlopers in our dirtied eden, poisoned by our desperate self-serving fears.

There's an itinerant bee man down at the end of the road whose 100 hive boxes have been servicing the local crops, especially the cranberry bogs. His bees have been busy here in garden and meadow and it's plain neat to see their little cargo pant pockets bulging with pollen. When I see a bee in Oak Park, I am grateful to the local apiarist who's taken up the challenge of hosting a hive or two. It's a honey of a hobby.

Enjoyed the bee keeping video immensely. It is important to make people aware of the importance of bees in the ecosystem.