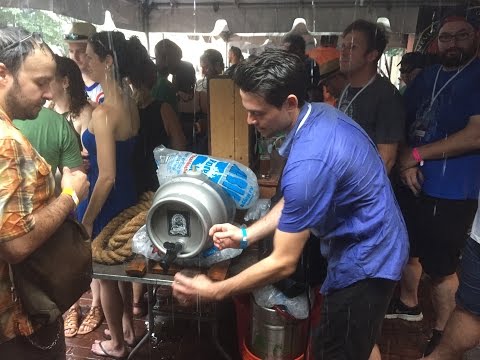 The hops I planted three years ago to cover up our ugly chain-link fence have finally settled in, so now, in their fourth season, I am a budding backyard hops grower with an imminent harvest on the horizon.

So, on Saturday, August 15, it made sense for me to head down to the Oak Park Micro-brew and Food Review in Downtown OP.

It was a fundraiser being co-produced by Seven Generations Ahead and Illinois Craft Brewers Guild, so why not?

While there, lots of local brewers opened their taps, and in the V.I.P. area they were running a competition for the best ReplicAle style Saissons -- served up in refillable beer sipping glasses that came with the cost of a ticket.

This annual SGA summer gathering -- 8 years in a row -- was also being billed as the largest zero-waste craft beer festival in the Midwest.

Gotta love that, although zero waste can be a term that is hard to get one's head around, so click now and read this.

SGA's executive director Gary Cuneen, who BTW is a backyard hops grower himself, says "Zero waste is really an aspiration.  What we do at this event is try to increase recycling, eliminate waste sources and take all of the food scraps so they can be composted.  We just make sure that what we're using is something that can be recycled or composted."

Time for my full disclosure:  When we experienced that mid afternoon torrential cloud burst of rain, my time at the fest was through, sans ANY beer tastings.

Quick, call a waaaambulance for me.  Even a downpour didn't stop everyone else from taking their pours.

Then some completely GOOD NEWS:  I did not see one drop of craft beer being spilled.

Now, that is what I call zero waste.

I take a different point of view. I find the...