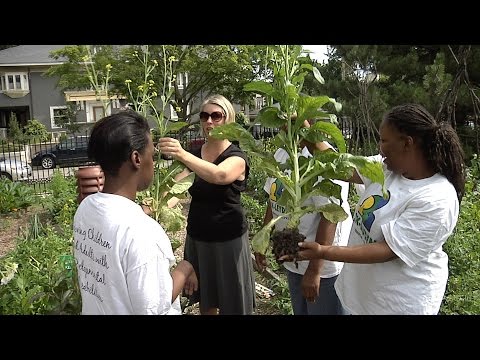 Cheryl Munoz with Oak-Leyden volunteers in the "All Abilities, All Ages" garden at Cheney Mansion

Deb gets a tour of the Alex Anderson Memorial Garden at Hephzibah Home.
< >
< >

Cheryl Munoz with Oak-Leyden volunteers in the "All Abilities, All Ages" garden at Cheney Mansion

After checking out most of the gardens featured on this summer's Sugar Beet Co-op Edible Garden Tour, post event, I circled back to see two more.

I was told they were special, and that is an apt descriptor for these two gems.

The first growing space is a new community garden at Cheney Mansion called the All Abilities, All Ages Garden.

It's a new program of the nonprofit Sugar Beet Schoolhouse, where people living with intellectual and physical disabilities, as well as gardeners of every age, can go to grow good food in a welcoming community of gardeners... and then grow from the experience themselves.

"I enlisted volunteers through the support of community partners such as Oak-Leyden, WSSRA and Opportunity Knocks," says Cheryl Munoz, its Founder and Executive Director.  "We also have support from Concordia's Gerontology Center, and through the Townships Senior Services."

All the harvested veggies, herbs and fruits grown here are picked (and sometimes eaten), and always a donation drop-off to the Oak Park-River Forest Food Pantry.

Hmmm.  Didn't know you could do that.

The second garden is also run by a local nonprofit.

The Alex Anderson Memorial Garden is the new and improved garden at Hephzibah Home, and is woven into the backyard children's play lot.

Hephzibah Home's Executive Director Mary Anne Brown told me that this is a deep-rooted group home that provides a warm and nurturing environment for children who have been traumatized by abuse, neglect, multiple foster care placements or failed adoptions, the garden was also a collaborative effort.

In Spring 2014 is when the previous lack luster garden was revitalized into this one, with an assist from the green thumbs at Root-Riot Urban Garden Network.

When I visited this now productive green-and-growing space, the "Head Gardener" gave me a tour, while the rest of his crew -- Hephzibah's kids and volunteers -- weeded, watered and harvested their carrots, tomatoes, squashes, herbs and whatever else was ripe and ready to go.

Some of the produce, the "Head Gardener" said end up in the kitchen, some would be saved for canning purposes, and a portion was always delivered by the kids, with a volunteer in tow, to the Oak Park-River Forest Food Pantry.

Very soon, as a contributing reporter for Wednesday Journal, I will be writing more in-depth about these two programs in conjunction with the award-winning Wednesday Journal's annual special section, "Community of Caring" -- 12 heartfelt human interest features that tell the stories of the work local nonprofits are doing, day in and day out, to make living a little easier for the individuals they serve.

Until that publishes on October 7, here's a preview of the gardens with our latest DBB On-the-Road video.  Dig in.

Nick, to cast aspersions means to attack. Stating the...

Tom Holmes did it again. Splendid coverage, full of...

This is not a public dialogue but aspersions by a ...

Hey, Nick, yes, systemic abuse is scary. But even...

Thanks, Joyce, I have. Through many long years of...

In the Immortal words of Meatloaf "Stop Right...