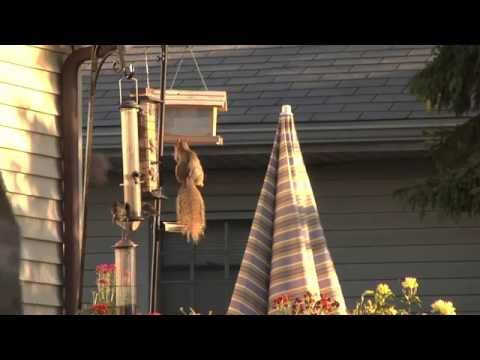 By now, many backyard gardeners are in full battle mode with garden pests.

It's the likely suspects, the "mug shots" that can be found in The National Gardening Association pest control library:  the aphids, whiteflies, hornworms, cabbage borer worms, squirrels, and more.

Eradicating them, or at least trying to, stinks.

Been there.  Done that.  It's not pretty, especially slugs that are munching on your young tomatoes.

Using strategically placed beer in tuna cans work.  It's a drink and drown dirge for them.

Recently though, I upped my ante by having an impromptu gardening "meetup" with George Rotramel, a Consulting Entomologist at Rotramel Technical Services, at an outdoor garden pest talk during the 35th annualAmerican Community Gardening Association conference in Chicago.

And, I learned a little more about bio-controlling garden pests, which means doing it without using pesticides, or even using salvos of so-called organic soap sprays.

Instead, he suggests companion planting flowers and herbs with veggies to attract a range of native beneficial bugs.  This is called biologically controlling pests.

BTW, he is not a fan of spraying so-called organic soap products.  He'd rather let nature kick in to efficiently and ecologically control a gardener's pest problems.

Alyssum, he says, is a natural nectar providing plant for syrphids (also called hover flies or flower flies), a native fly that as an adult will use the nectar from the Alyssum, and then lay their eggs on every plant in your garden.  When the eggs hatch, the larvae, which are tiny little fly maggots, "will hunker up all over the leaves, and anything smaller than them, they will eat," Rotramel says.  "That means aphids.  That means mites, and that is a very good thing, because for them white flies are like marmalade.  When I see a white fly problem I know that the plant is under stress and somebody has gone nuts with using soap.  If you just relax, and build a population of native predators in your own little system, you will be fine.  But the key is to get your good guys their early, try and keep your plants healthy, have some real soil in which they can grow, have a place for things to overwinter, be patient.  So in the garden, you just have to get those beneficial bugs started."

Since then I have also discovered that to attract more beneficials, including Lacewings, a.k.a. "aphid lions," try planting herbs like dill, coriander and fennel, to name only a few plants and herbs to which these good guys are attracted.

Rotramel also urges everyone not to freak out about wasps in the garden, as they are the natural predator for caterpillars.  (As an edible gardener, who loves butterflies, I am conflicted about this but do consider parasitic wasps that eat tomato hornworms from the inside out a very good thing.)

"Wasps are going to comb clean the caterpillars out of your garden," Rotramel told me in a pre-event interview. "A wasp is only a problem if you are bothering it, so let the wasps do their things, and what I am saying is don't bother the wasps, and they will not bother you unless you go out into your garden and eat a chicken salad sandwich, then yellow jackets will bother you."

Last year, parasitic wasps laid their eggs in a so-called hornworm, which on our vine was gross and fascinating.  It seems that now researchers, farmers and gardeners worldwide have learned how to use plants to attract beneficial insects.  Let's take my beefsteak tomatoes, for example.  When that tomato hornworm began feeding on tomato leaves, folks in the know are saying that the tomatoes do two things — they change their leaf chemistry so they become a less nutritious food, and they release volatile chemicals that attract natural enemies.

Herbs, such as Chocolate mint, he says, can potentially deter squirrels and other rodents.

"If you have a barrier of chocolate mint-like plants, or if you have chocolate mint that you chop down and use like a mulch, that will (likely) protect your plants from squirrels, and from rats and mice," Rotramel says.  "I encourage people to plant chocolate mint around the base of their buildings."

But, circling back to the use of bio-control measures to address backyard pest problems without using pesticides, he told the crowd of community gardeners that "most of the herbs will be a good source of pollen for beneficial insects."  And "if you come out to your garden, and can recognize a Daddy Long Legs, the spider relative you see walking around your plants early in the morning and late in the evening, these animals will not bite you, and again, Daddy Long Legs are tremendous aphid predators.  They are good to have in the garden," he says.

He also said, and I am paraphrasing...To invite ladybugs in, it helps to have plants such as fern-leaf and common yarrow for starters, and certain types of Alyssum, too.  All the beneficials, he says, over winter in garden areas that are mulched.

Also, "If I were to tell somebody that if you have this, you have a healthy, pesticide free-situation, I would say watch for lightning bugs," the bio-control pest expert added.

Essentially, the all around good news here is that the larvae of the firefly is a fierce predator, and that's why you want them in your garden, the consulting entomologist says.

So, now, I am doing a few things right, and next season, more bugs will be gone from my garden for sure, based on what I will be companion planting then.

Meanwhile, in my backyard, those pesky squirrels are still taking bites out of tomatoes and trying to break into bird feeders.  I wonder if vertically growing some chocolate mint would help.

Re: the firefly larvae--lawn pesticides kill them, along with other soil organisms.

Love letting nature work in the garden--makes it a lot easier. I would just gently add that native plants all around too will definitely help out since chances are there will be a lot of caterpillars and other plant eating insects all the time, so I think it really helps to keep high number of beneficials around because there's food all of the time not just at the end of the season when pests can be an issue. Many of the wasps he mentions too are important pollinators and are busy foraging.

On: Class at St. Giles in quarantine...

Its funny, but in all the years I have lived in Oak...

Someone edited your comments here, T.Mac? Where? When?...

Didn't realize your job was to patrol the...

No wait for ballot drop off! There is a drop box in...

Just so you know, the village has no role in ensuring...