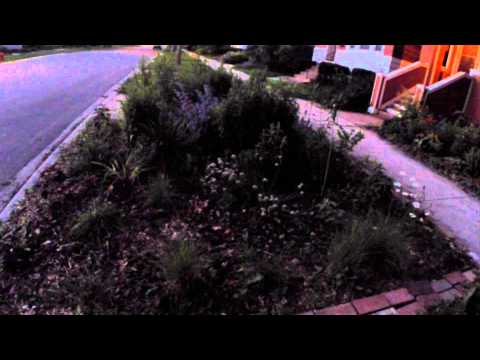 Firefly fun in the neighborhood.

Fireflies Lighting Up My Native Garden.

Firefly fun in the neighborhood.

That though they never equal stars in size,

(And they were never really stars at heart)

Only, of course, they can't sustain the part.

Fireflies in the Garden

The annual flicker of fireflies in flight switched on for us at dusk, the evening after the summer solstice in my front yard native gardens.

We felt their arrival was late this year, and truthfully, only a handful of them showed up to stage the small light show.

It is not surprising that seeing fewer fireflies has become commonplace.

While the jury of science is still out as to specifically why their numbers are decreasing, the fact is that the number of fireflies are dwindling from marshes, fields and forests all over the country, and worldwide.

Some environmental observers are speculating that the decrease in numbers of the elusive creatures might be due to the paving over of too many once lush firefly habitats; the proliferation of light pollution; and, of course, the use of PESTICIDES, which is killing them, and more insects that pollinate plants.

As gardeners, there are a couple of tangible steps we can take to help out.

1.  Create a firefly-friendly habitat with a variety of colorful blooms offering a buffet of pollen and nectar for them, as well as other pollinators.  Also, try and plant patches of high grasses on the perimeter of your garden.  Having a water source (backyard pond,) plus nearby tall trees are equally important to help grow their presence in your gardens.

2.  Skip the chemicals and let the carnivorous firefly larvae feast on your slugs, snails and other unwanted garden insects.  Try doing integrated pest management options instead of using chemicals on your garden and lawn.  The natural world is intimately connected; pesticides may also kill non-pests, despite your best intentions.  Okay, I am done now.  Are you? If not, here are some additional facts about why using pesticides is working against nature in the garden.

3.  Dim the lights (light pollution) -- artificial lights interfere with the fireflies instinctive light signals, in that every time a firefly lights up, they are signaling to another firefly.  So if you create an environment in which those signals are easy to see, your firefly population could increase, a scientific source says.

4. Help grow the glow by protecting them in the larval stage.  Leave some tree litter, even fallen branches and logs.  Some firefly larvae are born in leaf litter and require it to survive.

5.  If your kids enjoys capturing flickering fireflies in a jelly jar, only "trap" the fireflies (with a lid punched with holes to let in air and a moistened paper towel on the bottom) for a short time, then, please do release them.

Oh yeah, and here are five fun factoids for the road:  (1) A firefly is a type of beetle, and there are more than 2,000 species; (2) Males (not all fireflies do) that do glow use their flash to attract females; (3) At some times, fireflies synchronize their flashing; (4) Fireflies light can be yellow, green or orange; AND (5) Firefly larvae may glow, even some that live underground or under water, to communicate to predators that they taste yucky (they produce unpalatable, defensive steroids for protection).

Few things in early summer surpass the magical fireworks these elusive creatures put on, so do sit back and enjoy the show.  It's a rite, and the right thing to do, all summer long.

I am kidding, but best wishes on your new venture. Oak...

Good luck to this new venture, which sounds great. But...

I am glad to hear that Ann Arbor chose someone with...

Please let us know about the next job interview, in...

Thank you for sharing this beautiful poem, and thank...

On: Black lives have always mattered

Robert Milstein, I agree that Simone should be...

I don't know what else to do. Thank you to anyone...

Kevin Peppard I do not think Oak Park is at the level...

Robert Milstein I do not base my decisions just from...