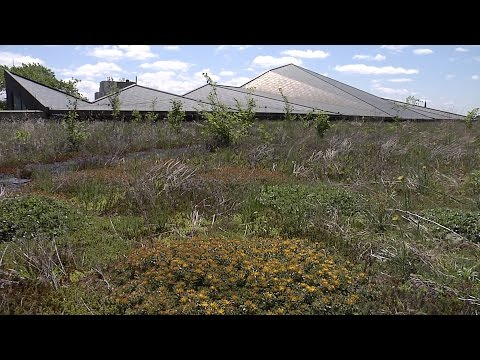 It was bound to happen.

Don't worry.  It's just a few factoids about green roofs in the City of Chicago, and of course the Village of Oak Park.

Question One:  Where did the modern green roof movement begin?

Question Two:  What was the first Green Roof in Chicago?

Question Three:  What is the largest Green Rooftop in Chicago?

Question  Four:  What was the first Green Roof in Oak Park?

Hope you didn't peek at the answers already...or maybe you did.

Answer 2:  Mayor Richard M. Daley and the City of Chicago began construction of a 20,300 square foot semi-extensive green roof in April 2000.  It was completed at the end of 2001 at a cost $2.5 million, funded by a settlement with ComEd. Encompassing one square block and twelve stories high, this retrofit application serves as a demonstration project and test green roof.

Answer 3:  Millennium Park, at 24.5 acres is considered one of the largest green roofs in the world, having been constructed on top of a railroad yard and large parking garages.

Answer 4:  The award winning Oak Park Public Library's Main Branch, an ecologically-friendly building with a green roof, that was constructed in 2003.

It was followed by the Village of Oak Park's award winning LEED certified Public Works Building in 2007.

Enough!  Okay, go ahead, and climb the ladder to take the virtual tour of these, plus an Oak Park homeowner's green garage.

Did "Guide to the Suspicious" include the...

Another spot-on commentary by Marc!

Pretty sad that this is funny.

Go do your own research, Brian if you're so...

The fabric of his backround has a rich hue and texture...

On: Man arrested for Clinton Ave....

This is what a smart, focused response to the problems...

I'm a big microgreens fan and grow them during...

On: American Pride Microgreens at Oak...

Jim is clearly a trumper and antiscience guy. Jeff,...