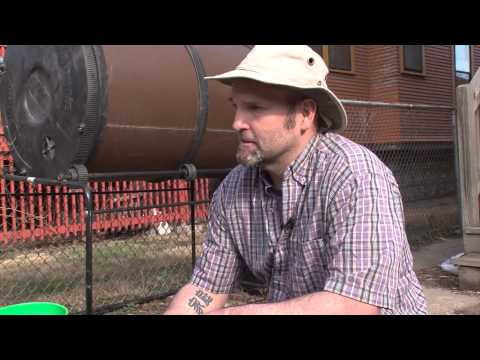 A simple DIY cold frame in Seamus Ford's back yard.

A container garden on Deb's back porch.

A simple DIY cold frame in Seamus Ford's back yard.

Over the last two weekends of March is when as a volunteer I tend to sit at tables fielding  questions during two long-standing and annual flower and gardening events in Chicago.

Most recently, I was at the Art in Bloom flower show at Macy's, which is free, and runs through April 4.

Two of the most frequently asked questions I received were "can I start growing a few vegetables now if I live in a condo," and "can I start anything outside in spite of the flip flopping temperatures?"

The answer to both of those questions is yes.

First, the veggies, herbs and flowers that can grow in your urban or suburban garden can also be grown in a suitable container, either on a sunny windowsill, or outdoors on a patio when the temps stay consistently warm.

However, right now cool and warm weather seeds can be started indoors under grow lights, and later transplanted outdoors in late Spring or early Summer.  The key to success is creating the right conditions -- the correct soil, plus always making sure the seedlings have enough water, nutrients and light, according to each particular plant's requirements.

For example, in the last two seasons, I have successfully started my heirloom tomatoes under lights in my basement, then vertically grown those indeterminate varieties in space-saving and self-watering Earth Boxes.

For two seasons now I have cultivated a late-spring-to-early-fall snip-and-eat herb and lettuce garden in a re-purposed wash basin situated on the porch and out my back door.

Currently, I am growing lettuce, radishes and spinach outside in a DIY cold frame I cobbled together using re-purposed materials that were cluttering up our garage and crawl space.

I first learned how to build a cold frame -- without using power tools -- last April when we dropped by Seamus Ford's backyard.  He is the co-founder of Root-Riot Urban Garden Network who says a cold frame is "a heat sink. What you're doing is capturing solar gain. What happens is just by putting a window over the frame, the sunlight that hits the soil warms it up during the day.  It warms it up more because the heat doesn't escape into the atmosphere because it actually is concentrated down in the soil.  When you till the soil and aerate it, it actually comes back to life.  So where the ground might be frozen outside of the cold frame, it's (in the frame) literally teeming with life."

For anyone who does not know him yet, Seamus is the local go-to-guy and ongoing resource for figuring out sustainable ways to grow an edible garden at home, in a raised bed at a nearby community garden, such as the one in Austin, or with kids at nonprofit and school settings -- as he has done at Alex Anderson Memorial Garden at Hepzhibah Home.

Or, you can watch this extended version of the "Building a Cold Frame" video we originally did with Seamus in 2014.

On: Guns in the bank?

I remember in the 90's there was a Mexican Restaurant...

On: Name change in store for Lalo's...

Adult Deer were removed in early October. The young...

Brian was an amazing teacher I loved working with him...

"Building a new facility on the south end of the...

Monnie Burke's was on "Check, Please"...

With regard to recycling paper and cardboard board...

On: What to do with all those campaign...

Eileen, you must have stopped at the marijuana...

Gosh, how could I have possibly misunderstood your use...