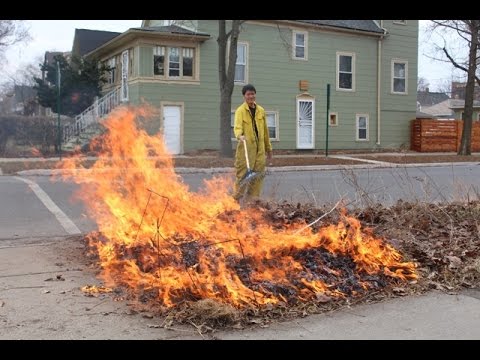 Last Friday, which was the official first day of Spring, my spouse and I were off to Good Earth Greenhouse to purchase the supplies I needed to start some seeds under lights in my basement.

En- route back, I smelled smoke.  Lots of it.

Forgive me for this...

She said:  "Kevin, I think a house in our neighborhood is burning down."

He said:  "No.  It's only Doug Chien setting his native gardens on fire again."

OMG, gardeners.  I had been waiting many seasons to catch one of his early Spring prescribed burn "shows," and now here it was, smoking and burning right outside my car window.

Whoa.  I had serendipitously stumbled across it.

Anyway, thank goodness for iphone 5 video, 'cuz in the heat (groan) of the moment, it fired (double groan) up.

Already observing his in-progress, eco-friendly and educational demo was a small group, including Doug's wife, Michele Gurgas, the Oak Park Fire Department, and Doug's daughter's second grade class from Irving School.  All of us were learning how "after the ash goes down, if we get a nice rain, because of the ash, which is basically a really nice fertilizer, we can expect to see all this turning green in a few weeks," Doug said.

Initially, it was in 2011 -- the year Doug (or Douglas, if you prefer) and Michele were given VOP's Green Award, in recognition of their native landscaping -- when I first saw their gardens.

Then and now, Doug describes himself as a natural landscape advocate, with a strong lean to ecological conservation.

That day he told me why performing a periodic prescribed burn on his parkways is a win-win:  The areas that have undergone the prescribed burn will green up faster than parts that were not burned, and the plants will grow bigger and healthier and produce more flowers.

His yard and parkways at the intersection of Highland and Harvard, he said, have matured into an all-native Illinois prairie, savannah and woodland garden, from foundation-to-curb, "and because this is a native landscaped yard, as part of regular maintenance, and to keep the plant communities healthy and happy, we burn it," he said, adding that he tries to do this annually, or every other year in early spring or fall, depending on the weather conditions.

This day was perfect.

"We do this in full cooperation with the Village of Oak Park, got all our permits, and today I had my kid's class come over and watch as a nice educational opportunity, and we set all this on fire," Doug said.

In between managing all those small and big bursts of smoke and fire, he also told me that all native ecosystems in this part of Illinois need controlled fire, and without regular burns they get sick and start dying.

"This is basically a mini-ecosystem, and because of that, you gotta burn it," he said.

Uh huh, I said, wondering if the "you" meant me.

Well, that was a resounding NO...because to fire up a native landscape in Oak Park, the person must spend the time to undergo a certification process, and get all the appropriate nods, as Doug did, as fire, is a critical tool in maintaining a healthy native garden, but fire is also dangerous.

"Like any management tool, you have to be trained to use it properly," said Doug, who holds a Masters in Ecology & Landscape Architecture, and possesses certifications from a national wild fire coordinating group.

"If you aren't trained, things can go bad, and people could get hurt.  I, for example, have had over 20 years of experience doing prescribed fires, and have proper safety tools, including my yellow nomex fire resistant suit," he said.

Even though I have no plans to do this now, I could possibly do it because Doug is willing to help residents such as myself with the permitting process, then drop by the home to set and manage the prescribed burn.

"If you can't burn it, because your garden is too close to your house, I would wait a few weeks," he advised, "then trim it back to the ground, because right now you are going to have eggs -- pollinators and the other native critters -- overwintering in the dead foliage."

Then, he caught me off guard with this factoid:  Me putting a native garden in the parkway, such as his, without getting permission from the Village of Oak Park Forester, is technically illegal.

It's no secret that I went native on my little plot of parkway last summer.  Without permission.

To see if I would soon be locked away in the "plant pokey" for gardening rogue, I rang up Rob Sproule, the Superintendent of Forestry of the Village of Oak Park for a few facts.

Forester Rob patiently fielded my questions, then allayed my fears by pointing out that the Village has no interest in finding tearing out all those existing parkway native gardens, or even returning it to turf.

However, he was clear that "Section 25-1-5 of the Village code requires that a resident seek and get permission from the Forestry Superintendent before undertaking any type of improvement in the parkway."

The big concern is public safety, which involves clear sight lines, and such, and he is hoping more gardeners will check in prior to improving the public land for the all-clear, and perhaps some cool plant palette suggestions from him or his staff.

"We see these native landscaped parkways popping up more and more across town, most done without the Village's permission, and in order to protect their (the gardeners) investment, and the public (neighbors, pedestrians and motorists), the Village would prefer to see a resident make these types of improvements on their own property rather than the parkway," Rob said.

Currently he says that the VOP Forestry Department is in the initial stage of discussions with the local chapter of West Cook Wild Ones to address the issues.

They are the group of native landscaping enthusiasts whose aim is to create -- with the assist of local businesses, municipalities and gardeners -- a wildlife corridor of Illinois wildflower and native plant gardens on private and public land.

Lots and lots of ideas to spark all this will certainly be covered at their upcoming native plant conference in mid-May, for sure.

"We are actually hoping to develop a combined brochure or pamphlet that says, 'hey, here's what the process is, here is what is allowable, here is what is not, and then here are some plant suggestions based on what would, or wouldn't work, based on your circumstance.'  So it is all starting to come together," Forester Rob said.

Wow.  I must say that most of my burning questions have been answered... at least for now.

I'm glad Deb has cautioned us that burning is for the experts. It's wonderful to see the native gardens popping up in Oak Park.

Thanks for another awesome piece, Deb! Info on Wild Ones Native Gardening Conference, at Dominican Univ. on May 17, is at www.nativeplantconference.org, with more details at westcook.wildones.org Great talks and workshiops and some native plants will be available to buy that day.

On: Guns in the bank?

I remember in the 90's there was a Mexican Restaurant...

On: Name change in store for Lalo's...

Adult Deer were removed in early October. The young...

Brian was an amazing teacher I loved working with him...

"Building a new facility on the south end of the...

Monnie Burke's was on "Check, Please"...

With regard to recycling paper and cardboard board...

On: What to do with all those campaign...

Eileen, you must have stopped at the marijuana...

Gosh, how could I have possibly misunderstood your use...