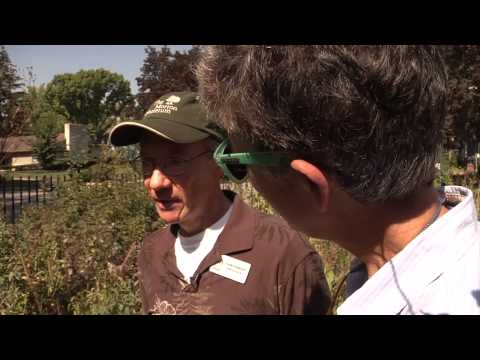 By now my butt is usually in the air as I work the soil in my edible and native landscape.

This year, though, Mother Nature hasn't given me the nod to do that yet.  So, instead, last weekend I planted my bum in a seat on the last day of the Good Food Festival for Sugar Beet Co-op.  It's a worthy cause and an extremely exciting grass roots venture that is no longer just a long-term vision.

This week, this Oak Park group announced they have secured an official new home for a brick and mortar grocery store.  It's at 820 Madison Street -- a  $45,000, 10-year lease.  Co-founder Cheryl Munoz is telling everyone the hope is for it to open by early 2015.

Last growing season, for this newspaper, I covered their trek to this point a bit.  And, aside from that, as a volunteer, I was tapped to be one of the urban farmers whose growing space was featured in their 2nd Annual Edible Garden Tour.

Here's something I rarely say in this blog,  but now is as good as any time to repeat it:  I am a University of Illinois Extension Master Gardener volunteer, so doing that piece of public education was a good fit, and very fun for me.

This year, of course, I'm planning to step back and give another urban farmer the opportunity to do that.  Hopefully, I'll be a hands-on volunteer in someone else's yard.  Pitching in at whatever level with whatever a passion may be, is a super way to give back to groups that make this community a better place in which to live.

But, back to the Good Food Fest gig.  Prior to me chatting up everyone I could muster at Sugar Beet's table -- one we were sharing with The Dill Pickle Cooperative in Chicago's Logan Square, and another Chicago co-op still forming --  I walked around, noshing on give-aways of oh-so-good food.  I was also talking to a range of farmers, all of whom were selling CSA (Community Supported Agriculture) memberships.

What caught my eye was an agrarian guy representing the farming program via Faith in Place. It's an ecumenical and earth-focused group that partners with over 900 Congregations in Illinois to embrace social justice issues -- Christian, Jewish, Muslim, Hindu, Buddhist, Sikh, Zoroastrian, Baha'i and Unitarian-Universalist.

The guy said that it helps people of faith understand that issues of ecology and economy are at the forefront of social justice.  He was explaining the Milestone Congregation Project, and it was easy for me to "buy into" the merits of that.

When I told him I lived in Oak Park, he put in a plug for their March Farmer's' Market event, which runs from 8:30 AM to 1 PM on Sunday, March 30, at St. Giles Catholic Parish, 110 N. Columbian Avenue.

Until then, I will be thinking about the e-mail I got from the West Cook Chapter of Wild Ones, another group I recently sat at a table for.  It arrived in my inbox last Saturday, just prior to me heading to the el...and well, you know what happened next.

It seems that in an effort to raise funds to support its community and school outreach programming, they are staging a Native Plant Sale, in partnership with Possibility Place.  According to Pam Todd, a founder of this chapter, folks who want to go native can choose from a wide variety of forbs, grasses, sedges, bushes, without breaking the bank.

Sometimes green folk just have to say something to save the planet, so I'm taking a turn again:  planting native and prairie plants in your yard will help bolster your ecosystem and increase the biodiversity in your neighborhood by attracting more bees, butterflies, and other pollinators, as well as birds to your growing spaces.

On its Facebook page, Wild Ones has posted a native plant garden design for folks interested in going wild, or better yet,  naturalizing their gardens.

I "liked" it, and am ordering a few plants from there that have been on my garden wish list: a Chokeberry bush, a few Royal Catchflies, and several Prairie Blazing Stars, as I am trying to attract specific pollinators and birds into my landscape.

Last summer, to personally celebrate the addition of Prairie Drop Seed and Little Blue Stem into my front native and perennial garden, I did an educational video about prairie gardening at Cheney Mansion featuring Charlie Ruedebusch (who has since retired as its head gardener).  This is a repeat worth repeating...yes?

For novices, I suggest staying away from those 'wlldflower' mixes from the box stores which could have invasives, and weeds! A good source of online info, native seeds and plants is Prairie Moon Nursery at www.prairiemoon.com

Two more cents from me: So... why plant a prairie garden in your front or back yard? For starters,it's sustainable, easy to grow and very GREEN. It is also a great way to augment a neighborhood's biodiversity while creating a showy, low maintenance perennial garden that requires no insecticides, fertilizers and no (or only some in very dry conditions) irrigation. Choose a few prairie plants and grasses that are small in stature -- not more than 3 to 4 feet wide and tall: Rudbeckia hirta (Black Eyed Susan); Echinacea purpurea (Purple Coneflower); Asclepias tuberosa (Butterfly Milkweed); and Schizachyrium scoparium (Little Bluestem) -- (http://www.illinoiswildflowers.info). But beware. Some prairie plants and native grasses can be invasive?so choose wisely.

All of our yards are connected as Deb's blog's name indicates. All of our choices that we make in our landscapes mage huge impacts and reach far beyond our own small yards. Slow down the accelerated species extinction rate by sustainable landscaping practices and planting natives. Our wildlife, large and small, need native plants. Our back and front yards are the new "wildlife habitats."The natural, wild areas don't function like they used to--too small and isolated to support biodiversity.

Thanks for sharing all of this great information about Sugar Beet, Faith in Place, the Good Food Festival, and West Cook Wild Ones' native plant sale! So many wonderful and hopeful things happening locally:)

Remember this at election time. The mayor and his...

I have a recommendation for what you can do with your...

Having another development on Home Ave does not make...

A historian once remarked that the Civil War was...

Readers can view the petition which has received over...

Given this country's dismal record of handling the...