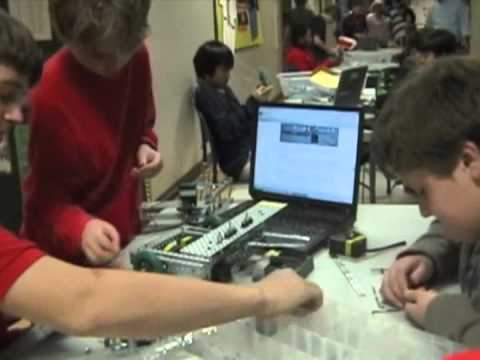 Participants designed, built, and programmed robots during club meetings to compete in a fast-paced game that involved picking up plastic balls and cylinders and depositing them in scoring goals of various heights. District 97's Vex Robotics program is run by the Oak Park Education Foundation.

After a lengthy series of qualifying matches at the tournament, eight Oak Park teams qualified for the finals, six teams from Julian and two from Brooks. Each of the top-ranked eight teams earned the right to select two alliance partners for the elimination bracket. Seventh ranked "Team Yellow" from Julian ended up selecting the "Julian TeamWhite" and "The Loose Bolts Team" from Brooks as their partners. This alliance beat the top ranked high school teams in the quarter and semifinals and went on to win by sweeping the finals best-of-three, 2 matches to 0. "It is not every day that a group of middle school students outperform high school students. This is a tribute to the dedication and months of hard work by these students", said Julian faculty advisor Tim Walsh. Julian mentors Sergio Firpo and Bob Parks credit the team success with the durability resulting from simple, solid designs, and really honing their driving skills. Parks added, "Simon Lee was a combination of Joe Montana and Mario Andretti, hands-down best driver at the event, and his teammates worked with him in perfect concert." Brooks mentors credit the success of "The Loose Bolts" to their self-reliance, teamwork, and years of experience in the club.

As regional champions, this three-team alliance qualifies for the Vex Robotics National and World Championships that will take place later this spring.

Make sure to check out our slideshow of photos from our January 28 Julian- Brooks Vex Competition and Open House from photographers Maria Soderburg and Paul Goyette. And watch this video of our Vex Robotics teams getting ready for the big competition.

Way to go!!!!!! Good job and congratulations. What a fabulous program.

We're lucky to have him.

Im curious to see the rules on how the handling of...

On: Not local but photo mocking George...

So, there are another 39 employees on payroll for an...

What happened to all the money they were planning to...

Absolutely sickening to not only mock the death of Mr....

On: Not local but photo mocking George...

I think all Presidential candidates should...

Kudos to the OPRFCF and all the donors, large and...

On: Aiming to weather this storm in the...

Honestly, I don't see how missing these milestone...

That is about right. Not much has changed at all about...