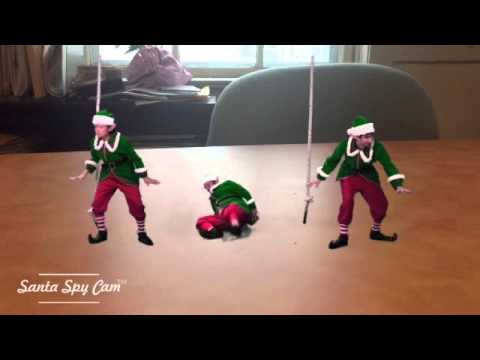 Adam Wilson, an Oak Park resident, says he was recruited by the North Pole's equivalent of the Secret Service to create a spy camera that gets the evidence that kids have always wanted; that Santa and his helpers are real.

"The magic of Christmas and the belief in Santa started to wane around the world," said Wilson in an interview with WGN News.

His solution to the growing disillusionment was a secret spy cam app, Santa Spy Cam, that parents could download to their Apple devices to create videos of elves peeking around corners and dancing on table tops.

Wilson's app, which first appeared in the iTunes Store back in November, has grown in popularity over time. Santa Spy Cam has accumulated over 250,000 Facebook likes, over 280 Twitter followers and has been downloaded over 170,000 times.

To test Wilson's spy camera, I downloaded the free app to my iPad. Like most other apps there is a license agreement to comply with if you want to use this North Pole approved software.

There are several video options. Some are free to use. Some of the videos that feature elves cost 99 cents and ones with Santa are $1.99. All you have to do is find a flat surface with no background motion and hit shoot.

As she's the one who wants to leave, there should be...

On: Supt. Kelley's next step

Both my daughters celebrated their Bat Mitzvah dinner...

Moves like this is why school will be from home in the...

On: Block parties are back but with a...

Many - perhaps the majority - of Fenwick's students do...

In "America to Me" the OPRF kids spoke of being...