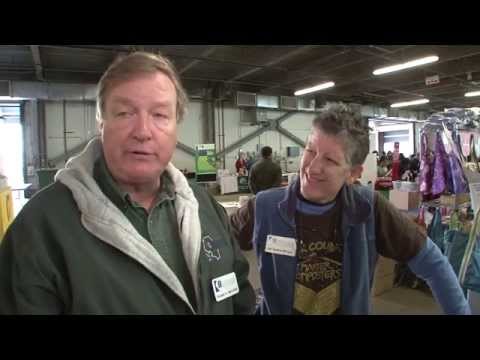 As I put my garden to bed, I began realizing that I had had a great growing season, and now an over abundance ofcompostable materials, too many to conventionally compost in my two earth machines.

What's an edible gardener, who is also a backyard composter, to do?  How about this:  Experiment with an easy, plus tried and true method (it's similar to sheet mulching/lasagne composting), called Comforter Compost.

It has come to be known as such because Comforter Compost blankets the soil with cushy layers of leaves, spent garden plants, soil, H20 – and I top mine off with straw, for good measure.  Then, on its own, it will rot and become nutrient-rich soil by the beginning of the next growing season.

Or, at least, that is my aim.  And, because I had so much organic garden waste, I created two, one in front, and the other heap of future humus out back, in pitching distance of my veggie and fruit beds.

It was a cinch.  To my last 4' X 8'  parcel of parkway grass I piled on and spread out a thick layer of leaves, holding them in place by rolling out a sheet of biodegradable gardening cloth.  After that, I added a thin layer of soil.  I drenched it all with water, and repeated that process, lasagne-style, topping it off with the straw.

A perk:  Just for fun I am going to broadcast some native seeds I have been gathering from nearby prairie plants, in hopes that they will take.

Truth be told, the seed to do this was planted in me earlier this Fall by a bud from West Cook Wild Ones.  She said that the advantage of comforter composting is that it is not only for creating new beds, or improving the soil in established parts of your garden, but it requires less work in the long term.

The co-authors Barbara Pleasant and Deborah L, Martin, whose book The Complete Compost Gardening Guide is the source of my knowledge here, agree, and add that it is...

Labor saving, in regards to preparing a bed of soil that is covered in grass.  This approach to composting borders on a no work method.  There is no turning or mixing of your biodegradable browns (source of carbon) and greens (source of nitrogen).  Just keep piling them on, add water, and compost will happen.

Self weeding, because you do not have to dig out existing grass or weeds, as the lasagne layering of the materials, with its weight and coverage,  will smother the existing vegetation by depriving it of light.

Naturally amends soil, in that night crawlers and earthworms make permanent tunnels underneath the heap.  The base layers of a Comforter Compost is the perfect habitat for them.

However, for folks without the space to do this, vermicomposting inside is a great way to join in, say two local University of Illinois Extension, Cook County  Master Gardeners I chatted up about the benefits of doing all this at Earth Fest 2014 in Oak Park.

Lasagna garden beds make for great growing conditions in the spring. In the fall of the year is a great time to gather tree leaves and use them in garden beds and save for adding as browns to composting systems. One idea is to mow them into the lawn. Forking them into the garden will add nutrients for the next season. I love to use a leaf blower as a vacuum to chop leaves which I save for using as browns in my two compost bins. Leaves are nature's bounty, and good gardeners don't waste them.

Yes, composting can be a fun-for-all. These authors show us that there are many different practices that re easy-to-do and inexpensive. I've only done three so far. Compost on, all!

Love this Deb! Thank you for the write-up; we will be able to link to the article with the how-to.

194 W BURLINGTON ST(block of Hollywood Motors)SAT 9/26 & SUN 9/2711AM TO 3PMEVERYTHING MUST GO! Paintings, Good Quality Furniture and much more!