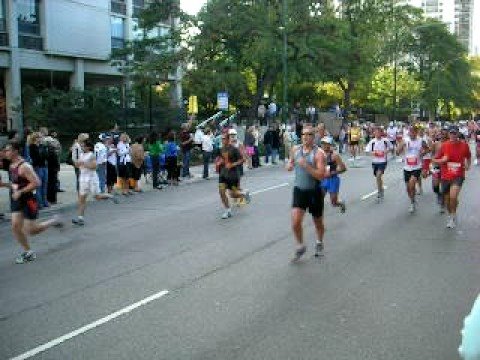 The Chicago Marathon is Sunday. It looks a little warm, but hopefully everyone will survive. Not surprisingly, Oak Park is well represented at the Marathon. Last year 182 Oak Parkers finished the race. The fastest was Loryn King who covered the 26.2 miles in an impressive 2 hours and 57 minutes. The fastest guy was jeremy Pennington who did it in 3:03. The youngest finishers were 17 years old, and the oldest was 71.

I ran 8 really slow marathons between 2004 and 2008 including The Chicago Marathon 3 times. Running a marathon has nothing to do with athleticism. It's all about discipline. It helps to be kind of compulsive. It's great fun to count your miles and time. Ego is a huge reason to run a marathon. Your family and friends think you're this heroic figure when you're really just a nerd seeking attention.

However, my ego eventually took a beating. Over the years I was passed by a guy dressed up like Elvis (see video), a guy in a suit and wingtips carrying a brief case, a little kid, an old grandma and a dude with no legs. My fastest marathon was 4:41, but that was the year The Lakeshore Marathon mismeasured the course at 25.5 miles. Sweet.

If you've never been to one--go. A million spectators watching 34,000 runners loop Chicago is very cool. It beats watching the Bears game without Cutler!

Eight times twenty six equals 208 marathon miles. When I do 208 miles in my car, it's time to check into a motel.

John H: We sold out of Oak Park and moved to FoPa in...

Thank you Martin Tellalian! Yes the Altenheim is...

Geez-Louise, Les. You may be the smartest human to...

Funny you should ask, Janet. I spent much time in...

Thanks, Dan. Donation made. Local reporting is vital...

"We want to be back in the building with our...

What? I assumed that this local Pravda got its...

Furthermore, why are the Washington and Jefferson...