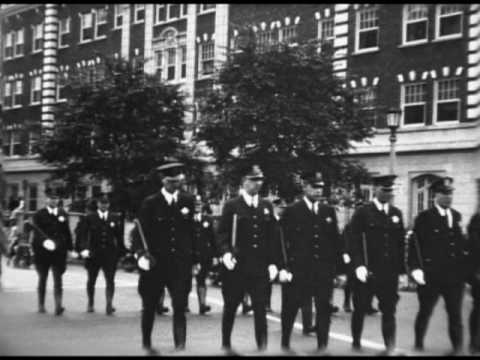 I  was trolling You Tube and discovered an exciting 9-minute 16 mm film.  It's apparently part of someone's home movies from the early 1930s.  Check it out.  It's black and white and silent except for some occasional narration provided by a man who is a 10-year-old kid in knickers in the clips.  I know nothing about the family, the guy who posted this, or the gentleman supplying the voice-over, which was apparently added in 1996.

The movie abruptly opens on Lake Street.  The title says 1930 but judging by the autobmobiles and other clues, I think we are actually in 1933, the year the Chicago World's Fair, "A Century of Progress," opened on the lakefront

The first scene opens on the 900 block of Lake Street.  You have to watch quickly as the camera keeps moving.  People are coming out of what was then First Presbyterian (though it's behind the cameraman and not seen).  Now this stone church at 931 Lake is called Calvary Memorial.  Across the street we see the Gothic revival style Grace Episcopal.

Watch quickly as the camera pans westward on Lake St.   Immediately to the left of Grace Church is E. E. Robert's Prairie-style, three-story Elks Club at 938 Lake.  This structure was razed in the mid-1970s and replaced with a parking garage.  The building was designed for the Benevolent Order of Elks in 1915 by Roberts (1866-1943), one of Frank Lloyd Wright's arch rivals and at the time the community's most popular architect.   Note, if you can, the strong horizontal emphasis, despite the height of the structure.  Meetings were on Monday nights but the clubhouse was open every day for recreational purposes.  Oak Park was a very "clubby" community in the early 20th Century.

Watch as the camera pans west to the "woods" on Lake Street, which was actually the front yard of the Austin family mansion, razed in the '60s in what is now Austin Gardens.  Before Lytton's and the Lake Theater and the other Lake Street businesses appeared on the scene, the Austin property ran right up to Lake.  It was sold off in the mid '30s and developed for business.  The Lake Theater opened in 1936, three years after this clip.

Behind the boys horsing around in the heavy snow you can see Oak Park Avenue at Washingtron Blvd., c. 1933.  Most of the homes are still there.  This was the age of the automobile, to be sure, but snow was still plowed by horse-drawn plows.

The narrator's family lived on the top floor, upper right apartment,  in the grey 1920s building at 317 S. Oak Park Ave.  That building now has a canopy in front with the name The DeVere  printed on it.  At one point in another quick clip the boys seem to be on the roof of the building and we get a bird's eye view of the neighborhood.

Note how the boys are wearing knickers ("knee pants".)  This was standard attire for males before graduating from 8th grade.  Guys donned long pants full-time when they went to high school.

The nation was in the depths of the Depression at this time.  Roosevelt was just settling into the White House.  Prohibition was still the law of the land.

There's a brief side trip to the Shedd Aquarium (note the double decker bus) and if you look quickly you can see the World's Fair off in the distance.  This family also posted a film of the fair.  There are also some bits shot at Garfield Park on the West Side.  Oak Parkers actively and frequently visited and enjoyed the parks of Chicago.

The narrator identifies the parade, with the Oak Park Arms Hotel, 408 S. Oak Park Ave., prominently in the background, as the 4th of July parade, but more likely it's Memorial Day, with all the Scout troops and even the nurses from West Sub marching.  Note the Girl Scouts in their cloche hats.   The NE corner of Oak Park Ave. & Washington Blvd. just across the street from the Arms to the north looks as if there is a home on that property.  There's an early '60s apartment complex there today.  Similarly, the property "kitty corner" from the Arms looks like there was a house there as well, torn down and replaced with the large red brick building that's there today.

In that era the Arms was a busy hotel noted for its ballroom (many folks held their wedding banquets there) and its radio station, WTAY, was widely listened to throughout the region for live broadcasts of bands playing at in that ballroom.  Today, of course, the Arms is a retirement community.

The Arms was completed in 1921, just as Oak Park was becoming known as the World's Largest Village.  Business was booming in the '20s so an addition was planned but unfortunately was not completed by the time the Depression hit.  If you watch very quickly you will see the unfinished addition (old-timers refer to the "iron skeleton") to the south of the Arms.  If  you pass by today you will see a noticeable difference between the brick in the two sections.  Once the Hard Times lifted we slipped almost immediately into World War II so that "new" addition was not completed until the later '40s.

This short, sweet home movie documents a painful period in our nation's history but we see virtually no visible evidence of the economic stress here.  Oak Park was growing dramatically.  We had a population of 20,000 villagers in 1910.  In the 1930 census, the period of this film, we had tripled to a population of 64,000.  Not all the growth was painless or stress-free, however.  Many were concerned about the influx of newcomers who were moving into the large courtyard buildings.  There was virtually non-stop construction with scores of 19th Century homes demoliished to make room for the apartment complexes.  Big department stores and state-of-the-art shopping drew hordes of shoppers to Oak Park to purchase everything from the latest fashions to automobiles.  During the '20s south Oak Park grew very quickly, too.

I love this movie and wish somehow the cameraman had shot more film up and down every street and in each neighborhood!  But this is so fun.  It's a real "time machine," documenting the life and times of our community about 77 years ago.

Fascinating, Doug, thanks! Your commentary adds so much.

I just don't have the vocabulary to describe how wonderful this film makes me feel! All the OP stuff I've ever seen before has been the basic static photo. THIS lives and breathes! Kudos, Doug!

Thanks for posting! This was really enjoyable. Love seeing OP pics and love that so much is still recognizable.

Congratulations on a great piece of history. I am amazed how fast cars were traveling in the snow. I think of cars in the 20's as slow moving. I now know why my mother told us she was afraid to go on a driving date with my lead footed father.Love the rugged snow play of the kids. Reminds me of growing up in the 1960's in Brooklyn NY when kids played without their parents watching, guiding, and cautioning.Thanks for the memory jogger.

Congratulations on a great piece of OP history. I was amazed how fast cars were moving in the snow.

Doug--This video is great. And I love the laid back quality of the narrators. Have you ever come across any other video like this in Oak Park? Would love to post it and archive it on OakPark.com

For the record, Madigan and Burke handle large...

The previous conversation on Mr Schwartz's...

Thank you, for speaking love of community over...

On: We can't purchase the future

I am absolutely blown away by the service at Gala-Tec!...

Thank you for the lovely tribute to the...

On: 'She was awesome'

Nine of those states that don't tax retirement...

The tax table below will show in detail the New Jersey...