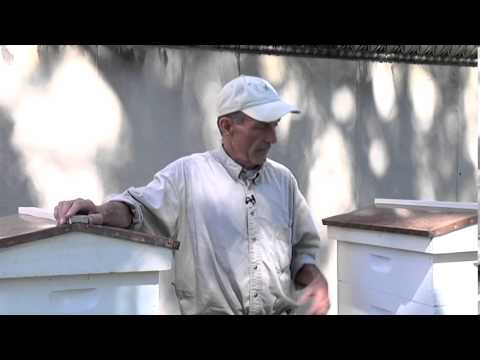 With me being a relatively new urban gardener, last year I spent a lot of time trying to attract more pollinators to my native plant and edible garden landscape, and recently I realized that me becoming a beekeeper in some form isn't a stretch at all.

I've been reading the ongoing troubling news about the plight of the honey bee.

In Oak Park and Chicago, my friends who keep bees are all abuzz about ways they can help out.

I'd like to support them, and pitch in myself, too.

Over the weekend, I sat in a room for five hours learning about how to raise and care for honey bees, as well as harvest their surplus honey from Naaman Gambill, Garfield Park Conservatory Alliance's lead beekeeper and Greening Program Coordinator.

In addition to all the public education Gambill does, he works with an enthusiastic and growing brood of volunteer beekeepers who help him manage GPC's 20 hives.

Again, being who I am, during the Beginning Beekeeping Class, among many other things, I was struck by these facts Gambill shared:

--  Honeybees account (directly or indirectly) for about 1/3 of human food production.

-- and, bees are also responsible for the success of many other nuts, fruits and vegetables

During breaks, my table mates, John and MIke, kept leafing through the Walter T. Kelly Co, catalogue.  For them, the time is now, since generally speaking, beekeeping season runs from April 'til October and packages of bees, or nucleus hives, Gambill says, go on back order quickly.

As they chit chatted about that, I'm thinking this:  yeah, I could visualize a couple of honey-producing hives popping up in several public spaces in bee-friendly Oak Park, for public education and commerce, as several for profit and nonprofit groups do in Chicago.

So, I shot out an e-mail to a local beekeeping friend.  She responded...why not on the Green Roofs of the Oak Park Library or Public Works building; somewhere on the grounds of the Oak Park Conservatory, or Village Hall; on the top of a municipal parking garage; at Cheney Mansion; or even incorporate raising bees and harvesting surplus honey as part of the outdoor science curriculum at any of the schools?

Well, even I know it's not as easy as all that, and of course there is the sting thing, but if Chicago can do it...why not Oak Park?

Until that happens, I'll let urban beekeeper Michael S. Thompson give his life-long passion a plug.  He is the director/ farm manager and a founding member of the Chicago Honey Co-op, which also offers beekeeping classes and more for area beekeepers to stay connected.  And, according to his website, between 2003-2010, he and others installed 8 beehives on 3 buildings in downtown Chicago; City Hall, Chicago Cultural Center and Gallery 37 for the Arts. The Co-op maintains these hives, giving the honey back to the city where they sell it in their gift stores to support cultural programs.  When he was working at the Garfield Park conservatory as a horticulturist and community gardener, in 2001 Thompson established GPC's Beekeeping Program, which is still going strong now.

If you buzz on by Garfield Park Conservatory in February, you can take a class, too.

I agree; Deb's love of gardening brings us to a large cross-section of important issues. We are all bee-keepers in a manner of speaking. Our yards are homes or should be to be to native bees; they are no slouches either and an integral component of ecosytems. Xerces Society and Cornell University have found that native bees contribute 15% of the estimated 18-27 billion $ of crops for which bees are directly responsible. Some crops can only be pollinated by specialist native bees.

Deb, thanks for shining a light on this important issue, and educating the rest of us as you pick up information along the way (in all your blog posts). I love the idea of local buildings with green or flat roofs hosting hives.