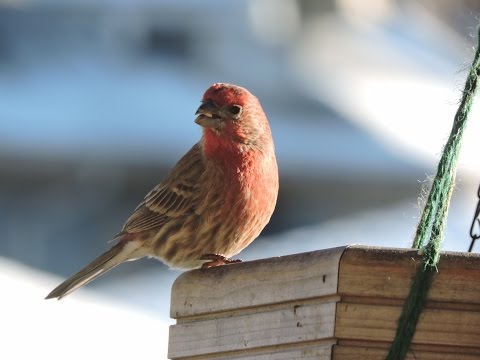 Last year about NOW is when I changed up my urban "farming" practices to focus on gardening for food and wildlife  --  butterflies, native bees, beneficial insects, and especially in winter, backyard BIRDS!

Initially, my interest in doing this was sparked by meeting Eric Gyllenhaal, the local Naturalist who is currently a science/nature educator at Wonder Works, A Children's Museum in Oak Park.

It was in his teenage years when Eric says his interest in birding started by seeing a Cooper's Hawk at his family's bird feeder.

Since then, he has become an avid birder, and participates in citizen scientist programming to assist in monitoring the dynamics of neighborhood birds by keeping a running count of them in Oak Park, as well as  several public parks in Chicago.

He likes to pitch in with these two birding groups e-Bird and Project Feeder Watch, he says.

Around here, many birding enthusiasts probably recall how in 2011 Eric, and his two teenage sons, Ethan and Aaron discovered a rare hummingbird in Oak Park.

The next spring, as a features reporter for the Wednesday Journal, I was assigned to spend a late afternoon counting birds with Eric and his sons in the "tucked away" butterfly and bird sanctuary surrounding the lagoon in Chicago's Columbus Park.

I got another heads up about the doings of Eric and his birding boys in 2013 when his younger son Aaron, made a big media splash when at age 16 he counted 276 species of birds -- a top flight accomplishment in the world of birding.

So, at the height of Fall migration, 2014, I went "hummingbird-ing"  with Eric, and blogged about how he attracts hummingbirds and other species to his backyard.

Now, as a beginner backyard birder, I was feeling that what I was doing could be fun for others, and of course,  "tweetable,"  since into my yard have come American Cardinals, Downy Woodpeckers, Black-Capped Chickadees, House Finches, Dark-Eyed Juncos, Mourning Doves, and Blue Jays, plus several varieties of sparrows, including this one, just in time for me -- AND YOU -- to join in the National Audubon Society's (and Cornell Lab of Ornothology's 2016 Great Backyard Bird Count February 12-15).

The organizers say:  GBBC is a free, fun and easy online event that engages bird enthusiasts of all ages in counting birds to create a data-driven, real-time snapshot of bird populations.  During GBBC, you can count the birds in your backyard for as little as 15 minutes (or as long as you wish) on one or more days of the four day event, then report your sightings here.

My biggest concern was how in the heck does one count birds in their backyard without duplication?  Well, to figure that all out, in mid-January I invited Eric to assess my backyard birding strategies, and, of course he did, and then some.

I want a binding referendum on the ballot that all...

The problem here is not cynicism from the right....

Haaaaa. So true! Way too many signs in Oak Park. They...

On: Remove 2 signs for every 1 erected

Never have so many tears been shed by those trying...

Guillermo using different words you wrote what my...

So, when groups like Freedom to Thrive release a third...

What are the "falsehoods regarding their...

On: What the Capitol attack and Live...

Kevin Peppard thank you for the update and the name...

Jr. your really do surprise me. I did not think you...