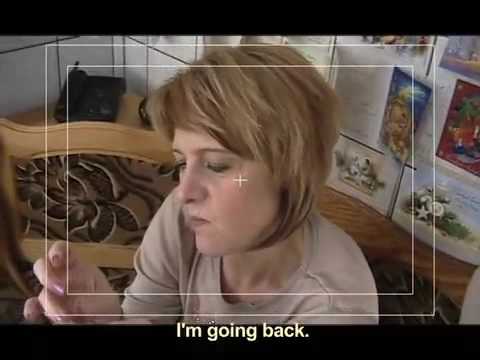 I had a chance to meet very talented local director and producer, Ruth Leitman (Ruthless Films), last year when she screened some of her films during the 2009 ArtRageous! Oak Park event. So I'm excited to see the upcoming screening of her new documentary, Tony & Janina’s American Wedding, at the Lake Theater on Thursday, November 4, at 7 PM. It's awesome that the Lake Theater screens art films and documentaries -- come out and make it worth their while so they continue to bring us the local, arty, interesting and seldom seen.

Winner of the Chicago award at the recent Chicago Film Festival, Tony & Janina's American Wedding is a feature length documentary that gets to the heart of the broken, red tape ridden U.S. immigration system. After 18 years in America, Tony and Janina Wasilewski’s family is torn apart when Janina is deported back to Poland, taking their 6 year old son Brian with her. Set on the backdrop of the Chicago political scene, and featuring Illinois Congressman Luis Gutierrez at the heart of the immigration reform movement, this film follows the Wasilewski’s 3-year struggle to be reunited, as their Senator Barack Obama rises to the Presidency.

I'm sure it is a technically well done documentary but I won't see it. I don't care for the subject since it apparently deals with criminals.

Big thanks to Shirley, Mike, Mark, and all at the Lake for booking the film on short notice - the film will be followed by a Q&A with Ruth, and hopefully Tony Wasilewski, the subject of the film

Jason Cohen maybe you can explain what you are talking...

@Rob, this is their own time. What are you talking...

Demand and protest on your own time. OPRF school does...

On: Oak Park native up for TV award

If kids want to protest things a few times a year then...

When an architect comments that the building is...

@ Bob Ruffulo: If this action was sponsored by the...

All students should have been arrested for leaving...

Tom DeCoursey You grasp the situation well although I...

On: Experiment in democracy is finished